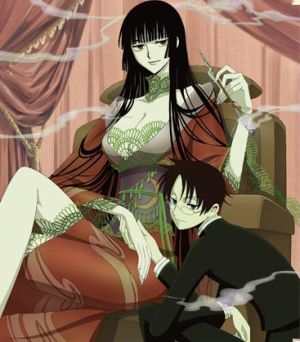 Kimihiro Watanuki is a high school student who is continually plagued by supernatural monsters and spirits which are magically attracted to him, which are invisible to pretty much everyone but himself, and usually try to devour him. One day, while running away from and nearly being eaten by some spirits, he finds a mysterious shop that grants wishes.

The shop is owned by the Witch of the Dimensions, although she has been known by many other names—even Yuuko Ichihara, the name she gives Watanuki, is only a pseudonym. She offers to grant his wish to be rid of his ability to see spirits, but a price of equal value must be paid. Thus, Watanuki becomes a "part-time worker", which usually involves performing housework and odd jobs for Yuuko, until he has done enough work for his wish to be granted.

Chapters/episodes usually involve a customer coming into the shop and asking for their wish to be granted by Yuuko, having usually negative or dubious results, or they involve some (usually risky) task that Yuuko gives Watanuki which requires his ability to see spirits. However, there is also an overarching plotline regarding a set of dark conspiracies and prophecies that becomes increasingly important in the later volumes.

One of the main themes in ×××HOLiC is the concept of hitsuzen—probably best translated as "inevitability" or "inevitable fate" (although what is inevitable is influenced by your mindset and past choices, this is more like a slightly fatalistic Chaos Butterfly than the Western concept of destiny) -- which affects many of the characters' actions throughout the story. Yuuko told Watanuki when they first met that it was hitsuzen.

This is a CLAMP work and is the darker companion to CLAMP's Tsubasa Reservoir Chronicle. There are also many crossovers with other CLAMP works within the story besides Tsubasa. The anime has two seasons, ×××HOLiC with 24 episodes (released in English by FUNimation), and xxxHOLiC Kei with 13. Most of the references to Tsubasa were removed from the anime. There has also been a feature-length movie (A Midsummer Night's Dream) and a 2-part OAD series, ×××HOLiC: Shunmuki and another OAD, unrelated to the plot of the first one, called ×××HOLiC: Rou.

The manga has been completed, with 213 chapters in all.

The name is pronounced holic, by the way. The '×××' basically denotes "insert something here", along the lines of '___holic' in English.

Tropes used in ×××HOLiC include:
Retrieved from "https://allthetropes.org/w/index.php?title=×××HOLiC&oldid=1965608"
Categories:
Cookies help us deliver our services. By using our services, you agree to our use of cookies.