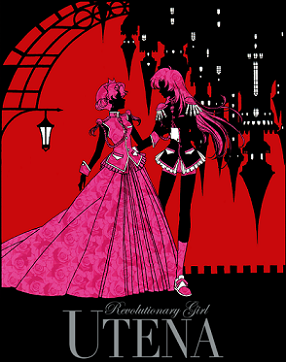 Revolutionary Girl Utena (Shoujo Kakumei Utena) is the Neon Genesis Evangelion of the Shoujo category... and not by accident. The show started airing in the spring of 1997 and flourished on Japanese airwaves with a time slot of 6 PM on TV-Tokyo every Wednesday until Christmas Eve of the same year. At Kobe Animation '97, it won the "Best TV Animation" award. A previous work by Chiho Saito, Kanon, possibly served as the inspiration for several of the themes and tropes in this story.

On the day of her parents' funeral, seven-year-old Utena Tenjou meets a prince on a white horse. The prince gives Utena a signet ring, which he says will one day lead her back to him. Overwhelmed with emotion, young Utena decides that she too will become a prince. Seven years later, Utena has followed the trail of her prince to the exclusive Ohtori Academy... and one fateful day, she defends the honor of her best friend Wakaba from upperclassman Kyoichi Saionji. Saionji calls Utena to the dueling arena at the back of the school, where Utena's ring opens the door to a private arena. After a duel with Saionji, Utena becomes enmeshed in a fencing tournament with the members of the Ohtori Student Council. The goal of this tournament is to gain "The Power to Revolutionize the World"... as well as the hand of the mysterious Rose Bride Anthy Himemiya. At the young age of fourteen, Utena is forced to deal with a power she is not ready to control and a world she never dreamed of being a part of.

Utena makes both friends and enemies at Ohtori while participating in the duels, and she grows in skill with each win. As she and Anthy slowly become friends, Utena learns Anthy has a connection to "End of the World", the mysterious force behind the duels. The story is properly set in motion in the show's second arc (the Black Rose Saga), when acting school chairman Akio Ohtori takes an interest in Utena... and everything promptly goes to hell.

Utena lovingly includes, describes, averts, inverts and subverts a large number of anime tropes, the most notable of which are Stock Footage (Utena's Once an Episode Transformation Sequence) and Clip Show episodes (two of the three contain major plot twists essential to the story). The series is known for its striking visual design—influenced by Takurazuka, Noh theater plays, fairy tale imagery, and classic shoujo manga—pieced together by director Kunihiko Ikuhara. It's also known for the lush soundtrack by J. A. Seazer, which mixes classical orchestral themes with outre choral harmonies and surrealist rock.

The show features commentary on (and references to) existing works, including—but not limited to -- Neon Genesis Evangelion, Carl Jung, Sigmund Freud, the House of Borgia, Paradise Lost, William Shakespeare, Cicero, Ovid's Metamorphoses, multi-episode obscure visual references to Manet, and numerous nods to the existentialist German war novel Demian. Underneath these themes, Utena is fundamentally a coming-of-age story, exploring whether it's possible to stick to childish ideals in order to defeat an opponent who is practically the living embodiment of adulthood.

Utena is neither explicit nor gratuitous, although some viewers may find certain implications of the plot to be distasteful (as an example: incest is a major theme, and it is explored from numerous perspectives). The story's core is based on a friendship turning into a romance between two girls who never expected it; the canonicity of what you see on the screen is debatable, but the Word of God statements by director Ikuhara on the subject are not.

The 1999 movie Shoujo Kakumei Utena: Adolescence Mokushiroku[2] (The Adolescence of Utena or simply Revolutionary Girl Utena: The Movie in the States), by contrast, makes the romantic nature of Utena and Anthy's relationship plainly obvious. Most of the characters are dramatically changed in both appearance and characterization, and the storyline is just as drastically altered (it is not so much an adaptation of the series, as it is a complete recreation). The movie is well-known for its Gainax Ending... as well as its Gainax Beginning and Gainax Middle; it could be an allegory on Mahayana Buddhism, Jungian philosophy, gnostic belief, or it could just be about lesbians. The series is often regarded as the Shoujo equivalent of Evangelion; the movie would then be Shoujo's End of Evangelion equivalent (both the series and the movie were directed by Ikuhara, which explains why the movie is as mindbending as the series).

Both the series and the movie were originally made available in the United States via Central Park Media, though their DVDs are out of print. In 2011, Nozomi Entertainment rereleased the series across three DVD sets (using the show's remastered Region 2 DVD release as the video base) and the movie (with the third set). The entire manga series, as well as the manga based on the movie, were also released in the US by Viz Media (and are also out of print).

As a final note: Word of God says that all interpretations of Utena's symbolism are true (Ikuhara could be perpetrating an elaborate joke though).

Tropes used in Revolutionary Girl Utena include:
Retrieved from "https://allthetropes.org/w/index.php?title=Revolutionary_Girl_Utena&oldid=1801467"
Categories:
Cookies help us deliver our services. By using our services, you agree to our use of cookies.