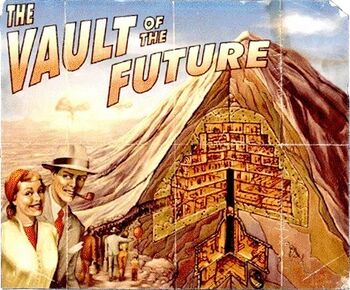 It has been many decades since the winds of the apocalypse blew in over America and took the old world with it, leaving only the Wasteland in its place. The event, known as "The Great War", was the culmination of a long and bloody struggle between USA and China over the last oil in the world. It came in the form of a massive global nuclear attack, which in two hours bathed the Earth in fire and radiation and ended all human civilization. But the human race is stubborn, and not so easily eradicated, and now small societies are starting to pop up all over the North American mainland, and you, the player, can either help them prosper or take away their hope, and watch them wither and die.

Arguably one of the best examples of how to make a nonlinear RPG ever, the original two Fallout games are loved by a small but passionate audience across the world, who laud the game's intuitive turn-based action and detailed world building, which takes its atmosphere from The Fifties' pop-culture and Weird Science stories from Pulp Magazines. The biggest draw is the way the games - particularly Fallout 2 - allow the player to do pretty much whatever they want.

Character creation is very flexible, letting the player specify their age, race, sex, physical and mental statistics, known skills and special talents. The player is then dumped into a post-apocalyptic wasteland with a distant end goal, no clear means of how to reach it, and a map that gives directions only as far as the one nearest settlement.

It quickly becomes clear that Fallout is very flexible when it comes to completing goals. For example, upon entering a crime-ridden area, the player can help the sheriff to take down the crooks, help the crooks take over the town, or Take a Third Option and mindlessly slaughter every living thing in sight (hey, at least there's no more crime). A Karma Meter tracks the player's behavior, and affects the reaction of other NPCs; if you're too good then criminals won't trust you with their missions, but being too evil means the same for law-abiding folks. If you ever gain "child killer" status you'll be ostracized by almost everyone.

Sadly, the multitude of options made the sequel incredibly buggy and virtually unplayable without patches (included in today's jewel case versions, so you have no excuse not to play it). Still, despite isometric 2D graphics that look distinctly crude by today's standards, the Fallout games continue to appeal to thousands worldwide because of their incredible depth.

The original Fallout games were followed by a pair of non-RPG spin-offs. The PC-based Fallout Tactics was a tactical strategy game that used settings, characters, graphics and the turn-based combat engine from the Fallout games. Fallout: The Brotherhood of Steel was a 3D, above-viewed shoot-em-up that challenged the player to wipe up the wasteland as a member of one of the clans from the RPGs. They both received variable reviews, although Fallout Tactics has built up a cult following, the console games never gained all that many equals.

Producers Black Isle had nearly completed a third game in the Fallout series, code-named "Van Buren", when parent company Interplay went bankrupt and shut them down. After spending several years as Vaporware, Interplay sold the rights to the series to Bethesda Softworks, best known for The Elder Scrolls, to save themselves from bankruptcy.

Bethesda chose to start development of Fallout 3 from scratch; their game was released October 2008, and is a fully-three-dimensional game with light FPS elements. It follows a Vault Dweller from Vault 101 as he or she searches for a lost father. The FPS elements were integrated well into the experience, and character advancement is far more enjoyable than in the Elder Scrolls games.

On April 20, 2009, Bethesda Softworks announced Fallout: New Vegas, with Obsidian Entertainment as the developers. The game came out on October 19, 2010 in North America and October 22 in Europe (the days the bombs fell) on the PC, Xbox 360 and PS3. Somewhat ironically, Obsidian is run by Black Isle refugees, the developers of the first two Fallout titles, and several Obsidian employees worked on Black Isle's original Van Buren project. Fan reaction is perhaps best described as "a tiny spark of hope shining through lots and lots of cynicism."

On May 30, 2018, Bethesda announced Fallout 76, to be released in November 2018. Among other features, Fallout 76 appears to be the long-awaited multiplayer version of the game.

Interplay, during its financial difficulties, proposed an MMO based on the Fallout franchise. They had been going forward with it, but then as of January 9, 2012, gave up the rights to carry on after a settlement with Bethesda.

If you're looking for radioactive fallout, see The Deadliest Mushroom.

Note: Tropes relating to the series and the Fallout Universe in general goes here. Please put tropes that applies to individual games in the series on their respective pages.

The following tropes are common to many or all entries in the Fallout franchise.
For tropes specific to individual installments, visit their respective work pages.
Retrieved from "https://allthetropes.org/w/index.php?title=Fallout&oldid=1965545"
Categories:
Cookies help us deliver our services. By using our services, you agree to our use of cookies.