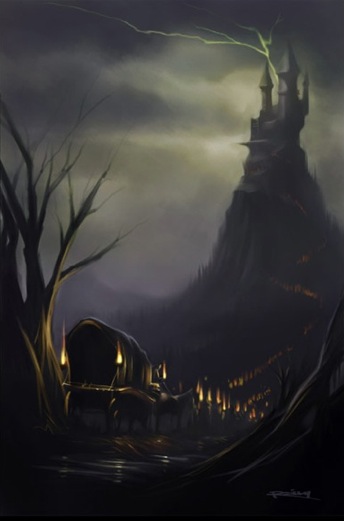 Through the valley travel the meek; Something wicked awaits at the peak...[1]

You think you're in a nice little Ruritania somewhere in Eastern Europe. Only the black forests are even blacker than you expected, and even more full of wolves. Some of which seem to be walking on their hind legs. When you finally get to the little town you were aiming for, the vaguely ethnic and primitive locals are huddling fearfully in the tavern, refusing to talk to you except to give vaguely-worded and heavily-accented warnings. So you go up to the castle in the hope of finding some civilisation. Bad move.

If there's a local nobleman living there, he will probably welcome you warmly—although he may be strangely insistent that you "enter freely and of your own will". He will probably be the kind of old-school nobility that views peasants as farm animals on two legs. Very old nobility. Blood nobility. Alternatively, there might be somebody more modern and technically minded living there, along with his lab assistant. Unfortunately, he will probably not be big on the Precautionary Principle and make strong attempts to persuade you to "volunteer" to take part in his research. Somtimes, the castle might not even be inhabited by anybody... visible.

Congratulations. You are now in Überwald. Hope you survive—er, enjoy your visit.

Don't expect too much help from anyone: if things get really out of hand the Torches and Pitchforks might get broken out, but the locals probably think that outsiders get what they deserve, even if they aren't all actively involved in the nastiness.

Invented by Bram Stoker and Mary Shelley (though Shelley's novel explicitly takes place in Ingolstadt, Germany and Switzerland), codified by the Universal Horror movies of the 1930s and 1940s, and deepened by Hammer Horror. Often regarded as a bit kitsch nowadays and played for laughs, to the point of being an Undead Horse Trope. Can also get you into trouble now that there are a lot more Eastern European people in the English-speaking world.

Überwald (spelled with an umlaut or as "Ueberwald" for those lacking a German keyboard), named after the Discworld country, would be a direct and bad German translation of "Transylvania" (a.k.a. Transsylvania in some spellings), "trans silvania" being Latin for "beyond the forest". In real-world German, Transylvania is called Siebenbürgen ("seven castles/towns"); in the Middle Ages it was sometimes also called "Transsylvanien" or "Transsilvanien" in German-language documents. Since medieval times, Transylvania has been home to three major population groups - Romanians, Hungarians (Székely) and Germans ("Siebenbürgen Saxons"), and thus most towns and places come with a German, Hungarian and Romanian name attached. Up until World War I, the former principality was part of Hungary, and in the treaty of Trianon it was transferred to Romania (the Hungarian name of Transylvania is Erdély, the Romanian is either the more traditional Ardeal or just Transilvania).