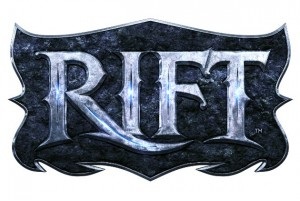 Choose your side. Fight the invasions.

Telara is a world that sits at the intersection of the Elemental Planes, which allows access to a whole load of resources, has caused it to have breathtaking vistas, given rise to multiple glorious civilizations, and had the unfortunate side effect of attracting cosmic monstrosities who want to take the whole thing for themselves. Also, the enchantment separating these monstrosities from reality has just been pierced by a madman. But don't worry! You, the player characters, are great heroes coming Back from the Dead to save the world!

Oh, and all the armies of other-worldly monsters absolutely hate each other and will therefore slaughter each other on sight. So there's that.

Rift is an MMORPG from Trion Worlds which purports to be a truly dynamic gaming arena, as opposed to other such games where everything is always the same. This is made possible by, you guessed it, the eponymous rifts cropping up randomly and spewing out hordes of monsters, while simultaneously altering the very landscape and just generally looking badass. The players can either shut the things or use their powers for themselves; it's really a matter of preference, although the Guardians would prefer the former and the Defiant might encourage the latter. But whatever your decision, one thing's for sure; if you don't move fast, you just might lose your opportunity!

Not to be confused with the tabletop game Rifts.

Tropes used in Rift include:
Retrieved from "https://allthetropes.org/w/index.php?title=Rift&oldid=1648135"
Categories: