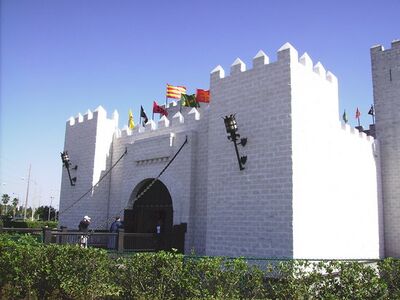 So, you have a Heroic Fantasy with a long history in order to account for the fact that the Sealed Evil in a Can has been forgotten. You fast forward about five thousand years and reveal a world... exactly like the one you started in! Same technological level, same form of government, same culture—you wouldn't even need to dress differently to fit in.

Medieval Stasis is a situation in which, as far as the technological, cultural, and sociopolitical level are concerned, thousands of years pass as if they were minutes.

Heck, the "castles and knights" period of Medieval Europe didn't even make it to five hundred years, and compare these three castles to get some idea of how much things changed even then.

Furthermore, there have been no wars—between countries or civil wars—no redrawing of any national boundaries, no demographic changes (both population increase and epidemic driven population loss have, historically, caused major changes), no changes in dynasty, no new organizations of political or social significance (such as guilds), and no fashion changes, either in art or clothing. Despite these apparent centuries of peace, there will still be a professional warrior caste standing for the entire period. If the landscape changes at all, even in the course of 100,000 years, it won't be due to geological processes, but due to magic. Otherwise, expect the landmarks and geography to remain identical across the eons.

Sometimes, in fact, it seems that things were better in the past, and things are slowly in a vague decline.

Sometimes Justified Trope by long-lived inhabitants, being a Scavenger World, having The Powers That Be artificially retard humanity's development, or other barriers to significant technological advancement. If some people do manage to create a Hidden Elf Village with advanced tech, it's Decade Dissonance.

There is an Enlightenment idea that the Middle Ages were a "dark age", in which the brilliance of the Romans declined. However, this only really applies to The Dark Ages, prior to the 9th century or so, when stone buildings weren't even that common. Technology ramped up again in The High Middle Ages which saw the invention of the mechanical clock, the crank, windmills, and three-crop rotation: the medieval world changed considerably. Even the so-called "Dark Ages" were a western European phenomenon- the Eastern Roman Empire, the Arab world, China, India, and many other places were as civilized and innovative as ever. The idea of a medieval decline is a trope in itself, which has been around since the Renaissance.

Some object to the idea that advanced technology is inevitable at a certain point. The history of cultures besides Western Europe shows that it is not. Greece and Rome both seemed to be at the point of being able to move into the technology of the Industrial Revolution but they never did. There are many other examples, like China, where cultures could have made the leap but never did, for various reasons (in part, due to the isolationism policy adopted by the Ming and subsequent Qing Dynasty). Usually, the reason was social (why scramble to invent labor-saving machinery when slaves are cheap?) or technical (you can't build steam engines if you haven't figured out how to make precision-machined metal parts, even if your civilization is otherwise very advanced).

Then again, it could just be the creator's attempt to avoid Totally Radical or Twenty Minutes Into the Future by the most readily available means, with no attempt at in-universe justification.

It should also be noted that some fans genuinely enjoy the lack of technological development and would be rather dismayed to see their beloved fantasy world suddenly discarding broadswords, plate and mail armor, and other such standard fantasy tropes in favor of guns and industrialization (even though the former really were around then). Not that that's likely to happen in less than centuries, so only stories that feature Flashback or Time Skip that long really need to worry about it.

The availability of magic, be it of the controllable kind or otherwise, can have a huge effect—consider the influence reliable healing magic would have on the the development of medicine. Then again, past magic might have been responsible for the current situation in the first place. Besides, your average non-magical Joe would probably be all for technology, as it would end the magic user's monopoly over things like fast travel, healing, and most importantly, blowing things to bits... assuming Magic Genetics is in place and prevents Joe from learning magic himself. It also raises questions as to why if wizards are so good they are content to let non-magic-using feudal rulers run things (unless the wizards actually do run things).

And then there's the question of whether science even works the way it does in the fantasy world the way it does in our real world. Considering that the Standard Fantasy Setting typically already violates some of the fundamental laws of science (wizards who cast fireballs and lightning bolts are essentially creating energy out of nothing, which goes against the laws of thermodynamics), who's to say that steam can actually serve as a viable source of power? Do the chemicals that make up gunpowder actually react the way they do in our real world, or do they just fizzle and pop, if they even do anything at all? You might be able to use oil to Kill It with Fire, but can that oil still power an engine? If it can't, would-be inventors and innovators don't have much to work with.

May feature in a Feudal Future — even if the technology is far advanced. Compare Modern Stasis. A related trope is Sci-Fi Writers Have No Sense of Scale, which is this trope applied to distances rather than time. Also compare to Muggles Do It Better, where in settings that separate the supernatural and the mundane world, the supernatural is locked in a medieval stasis while the mundane continues to advance. If parts of the world are stuck in Medieval Stasis and others have jetpacks, see Schizo-Tech.

Examples of Medieval Stasis include:

Retrieved from "https://allthetropes.org/w/index.php?title=Medieval_Stasis&oldid=1952462"
Categories:
Cookies help us deliver our services. By using our services, you agree to our use of cookies.