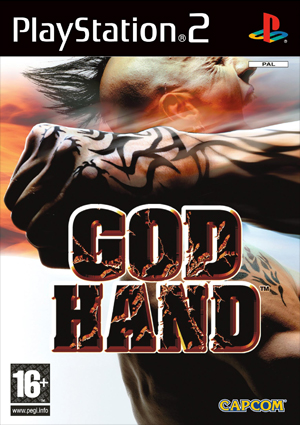 It's a game about punching people.

Many years ago, the Demon King Angra sought to conquer the world, gathering to him a massive army of demons. But then a hero emerged, possessing the power of God in his arms, and wiped the army out before facing and overthrowing Angra himself. The people named him the God Hand, and when he finally died, one clan devoted itself to watching over the God Hands, and the power within them. Those with that power can be either god or demon...

It's that sort of game.

God Hand, a PlayStation 2 Beat'Em Up developed by Clover Studios and released by Capcom, centers around a 23-year-old drifter named Gene. While wandering one day, he finds a young woman named Olivia being attacked by two punks, after the long package in her arms. He tries to fight them off and gets his right arm cut off (with a razor boomerang) for his troubles.

As thanks for saving her, however, Olivia attaches the package - the right God Hand - to his stump and explains the situation: a group of demons are trying to resurrect the Demon King Angra. Only the one with the power of the God Hand can stop him, and unfortunately for Gene, he just got drafted.[1]

Despite his complaints, Gene could use a good fight, and so he sets out to stop Angra's resurrection. To do so, he must defeat the Four Devas: Elvis, a fat, obnoxious, cigar-smoking pseudo-Latino pervert; Shannon, a succubus in all but name who lives to sate her desires; Azel, possessor of the left God Hand (or "Devil Hand" as he calls it), Gene's Evil Counterpart and Olivia's ex-fiance (he killed the rest of their clan); and Belze, their leader with very poor taste in suits.

Despite the above summary, this game has a very goofy sense of humor, which is what sets it apart. Your enemies include a gorilla in a wrestling mask luchador, many, many midgets, a battery-powered giant robot, and a Giant Enemy Crab. The Groin Attack is common, and female enemies are frequently dispatched via spankings. Heck, the mooks are often found dancing.

Be warned though... this game's Nintendo Hard. Expect to die. Often.

The Spiritual Successor MadWorld was released for the Nintendo Wii in 2009.

The game was among the first released under the Ps2 classics section of the Ps N, on October 4th, 2011.

Has nothing to do with the Five-Bad Band from Berserk, or with the legendary soccer move.

Tropes used in God Hand include:
Retrieved from "https://allthetropes.org/w/index.php?title=God_Hand&oldid=1900746"
Categories:
Cookies help us deliver our services. By using our services, you agree to our use of cookies.