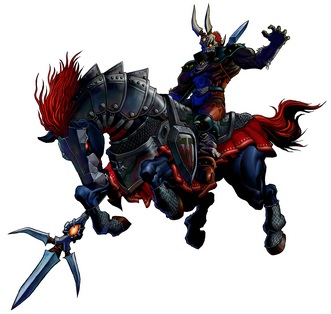 So, you have yourself a Badass, who now needs a badass way to get from point A to point B. Naturally, the Cool Car and the Cool Bike are there for him! The problem? We are in a High Fantasy story, mate. And we've got no stomach for that much Anachronism Stew. Rats.

An easy way to tell a Cool Horse is to check if it has a name. Especially, if it has a badass name. More especially, if it can run through the entire story without having to rest and eat. Most especially, if it looks badass - a Hellish Horse is cool by definition, as well as if it's involved in Horseback Heroism. Bonus points if, for whatever reason, the hero is the only person who can ride it.

A race who are Born in the Saddle will have plenty of these, though the chief probably has the pick of the coolest ones.

Many Cool Horses can be used in battle without any serious training—which is very much not true in Real Life. Indeed Give Me a Sword often asks for a horse.

On alien planets, a Cool Horse will usually have a different color... and may also be a machine. Or even talk. See Powerup Mount for video game examples. Compare My Horse Is a Motorbike, when a modern-day vehicle (most commonly a motorcycle) is given Cool Horse traits.

Contrast The Alleged Steed (which can be a Cool Horse in disguise).

Examples of Cool Horse include:

Retrieved from "https://allthetropes.org/w/index.php?title=Cool_Horse&oldid=1725447"
Categories:
Cookies help us deliver our services. By using our services, you agree to our use of cookies.