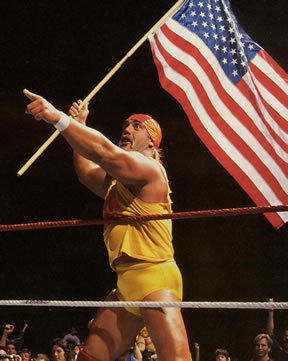 The All-American Face is one of the major stock characters of Professional Wrestling. He drapes himself in the flag, fights for Truth, Justice, and the American Way, and is as wholesome as Mom and Apple Pie (well, if Mom started using steroids, anyway.) He's proud to be an American, and expresses it at every opportunity he gets, even when wrestling in foreign lands. His entrance theme usually has references to being an American, his wrestling gear is in red, white, and blue (if it's not an actual American flag print); he may even go so far as to wave an American flag as he walks down to the ring. Before he became a wrestler, he was either a collegiate All-American in some sport, or a soldier; if he's a soldier, he'll pepper his speech with military lingo in between proclaiming how much he loves America.

The All American Face is the natural enemy of the Evil Foreigner, and thus they often find themselves paired in feuds. The traditional climax to such a feud is a Flag Match, where the flags of the two nations are placed on opposite turnbuckles, and the winner is the first wrestler to recover his nation's flag and wave it. When the All American Face is getting his ass kicked, especially by the Evil Foreigner, expect the crowd to start in with the chant of "USA! USA!"

Examples of All-American Face include:

Retrieved from "https://allthetropes.org/w/index.php?title=All-American_Face&oldid=1722658"
Categories:
Cookies help us deliver our services. By using our services, you agree to our use of cookies.