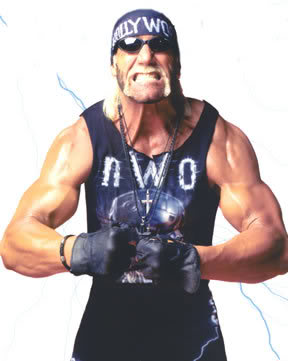 "As far as I'm concerned, all this crap in the ring represents the fans out here."

A Heel is a Professional Wrestling bad guy. He's the guy the fans constantly boo, who lives to make the fans angry and menace their favorites. Heels are typically the antagonists of a pro wrestling storyline or "angle." The Lucha Libre equivalent is known as a rudo.

Fans may boo a heel for any number of reasons; he may be cowardly, cruel, cocky, arrogant, whiny, or any combination thereof.

Sometimes a heel gets particularly popular with fans, and winds up undergoing a Heel Face Turn.

Note that heel heat is distinct from X-Pac Heat; fans Love to Hate an effective heel and want to see him get his comeuppance, while they simply hate an X-Pac and want him off their screens entirely.

The color commentator often takes the heels' side, the better to egg the fans on. Also, expect a certain section of the Smarks to delight in the heels' victories.

It's important to keep in mind, they have their Pet the Dog moments without having to make a Heel Face Turn since they can be disgusted on another heel's action. They can still remain and make life a nightmare for a Face but they too have to put other Heels in their place.

See Foreign Wrestling Heel for a popular type of heel.

The opposite of a heel is a Face, the good guy that the fans cheer for. See also Tweener (a guy who falls in between Face and Heel status, fighting either side as the situation calls for) and X-Pac Heat (when the fans hate the actual person). The Heel Face Index has some more variations.

Examples of Heel include:

Retrieved from "https://allthetropes.org/w/index.php?title=Heel&oldid=1840414"
Categories:
Cookies help us deliver our services. By using our services, you agree to our use of cookies.