Everything About Fiction You Never Wanted to Know.
Jump to navigation Jump to search
/wiki/The Undertakercreator 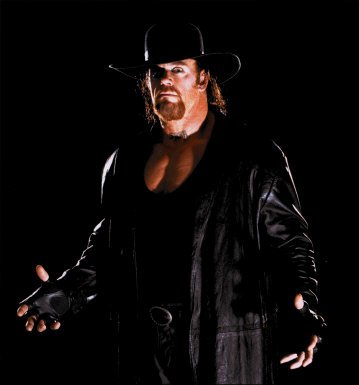 There ain't no grave can hold my body down...

The Undertaker is the longest-tenured performer in WWE history, spending thirty years with the company without officially leaving at any point (he was the last performer who appeared on the very first Monday Night Raw to still work for the company as an in-ring talent). Born Mark William Calaway, he is one of the most memorable and recognizable superstars in the company's history.

His career -- which you can read about in greater detail over at That Other Wiki -- is most notable for "The Streak": in his twenty appearances at Wrestlemania, The Undertaker has never lost a single match, and every year since Wrestlemania 17, "The Streak" is a huge part of the buildup to the annual event.

He and his Kayfabe "half-brother" Kane are the last two holdovers from WWE's "Rock 'n' Wrestling" era of high-concept, comic book-style wrestling gimmicks. Undertaker shed the "darkside" gimmick for a more true to Real Life one between 2000 and 2003, but he returned to it in 2004; even though an undead "zombie wrestler" with mystical powers sticks out like a sore thumb in today's somewhat more realistic WWE, fans still adore his gimmick anyway.

When WWE crafted its controversial "50 Greatest Superstars of All Time" DVD set, the company polled its roster to create the list. Undertaker was #2 on the list -- #1 was Shawn Michaels.

Not to be confused with The Coroner.

The Undertaker provides examples of the following tropes:
Retrieved from "https://allthetropes.org/w/index.php?title=The_Undertaker&oldid=1927825"
Categories:
Cookies help us deliver our services. By using our services, you agree to our use of cookies.