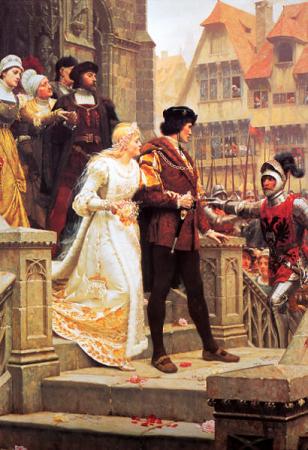 The duties of nobility.

Whether or not they have a sovereign whom they are subordinate to, these characters definitely have commoners who are subordinate to them. Their position is hereditary, often legally enforced, although occasionally simply socially accepted to the same effect; if a character is described as coming from an old and respected family, or even old money, he's a Blue Blood. They are often quite proud of the length of their lineage which makes them the natural Foil of the Self-Made Man. For the same reason young aristocrats are often quite powerless in the hands of The Patriarch who rules the family, making the threat of Passed Over Inheritance quite powerful.

While there are often gradations in rank between them, the common trait of aristocrats is that, unlike the monarch (because to royalty even nobles are commoners), they are surrounded by their equals and if there is no monarch some form of power-sharing will be in effect with plenty of intrigue. Prone to Moral Myopia, Blue Bloods often regard only their class as important, which often leads to Aristocrats Are Evil. Insults between aristocrats result in Throwing Down the Gauntlet, or the Glove Slap, and a Duel to the Death, but an insult from a commoner results in the aristocrat's servants thrashing him, and an insult to a commoner hardly counts, really.

Their effectuality is frequently inversely related to their civilization. Nobility of the Dark Ages often have an active hand in world (and story) affairs; nobility of a highly refined and civilized culture will be host to an inordinate number of Upper Class Twits.

Normal feature of the Standard Royal Court and Deadly Decadent Court. Endemic in Historical Fiction, High Fantasy, and Feudal Future. Oddly enough, often characters who have been Made a Slave have former nobility as their Backstory. The Officer and a Gentleman is also often a Blue Blood, particularly if the noble code emphasizes the duties and responsibilities that come with noble birth. As with Royalty, the Ermine Cape Effect can apply, so many should be expected to wear extremely fancy clothes if possible. Character related tropes are the Evil Chancellor, Regent for Life, Royal Brat, Upper Class Twit, Upper Class Wit, Proper Lady, and Grande Dame.

Not to be confused with royals, people who just hold knighthoods, Black Blood, Alien Blood, "Bluebeard", the freeform vulgar joke "The Aristocrats", nor the Disney film The Aristocats. Or Angels from Neon Genesis Evangelion and Mulians from RahXephon, both of which have "blue" as a blood type. Further not to be confused with the television series Blue Bloods, although the title is an amusing play on words.

Examples of Blue Blood include:

Retrieved from "https://allthetropes.org/w/index.php?title=Blue_Blood&oldid=1968465"
Categories:
Cookies help us deliver our services. By using our services, you agree to our use of cookies.