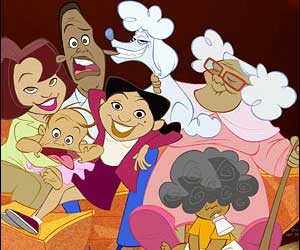 The Proud Family is an Animated Series on the Disney Channel and the first on cable TV to feature an African-American family. It aired on the Disney Channel from 2001-2005. Penny Proud is 14 years old, but her parents, Oscar and Trudy, still treat her like a little girl. Also living with Penny are her twin siblings, BeBe and CeCe, and her paternal grandmother, "Suga Mama".

In the USA, reruns can be seen Saturdays on the music channel Centric, and very occasionally, on Disney, where it originated.

The show's official site is at http://tv.disney.go.com/disneychannel/theproudfamily/

Tropes used in The Proud Family include:
Retrieved from "https://allthetropes.org/w/index.php?title=The_Proud_Family&oldid=1928559"
Categories:
Cookies help us deliver our services. By using our services, you agree to our use of cookies.