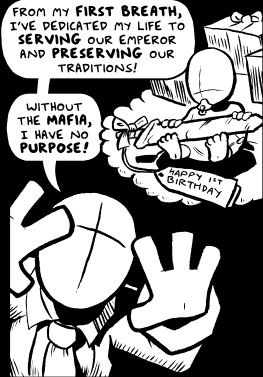 Mr. Blank tells it as it is.

Many Big Bads feel the best minions are homegrown ones. Tykebombs are typically raised from birth (or creation, for Sci Fi) or early infancy with the idea of serving out of loyalty. This means putting an immense amount of potential power into the hands of a wildly inappropriate user, usually a young child.

These villains would probably be more effective if said creations were not typically abused or treated badly by villains who insist they exist to serve their master, rather than being coddled and praised. This usually culminates in The Dog Bites Back, followed by escaping and eventually becoming a thorn in some hero's side. If the character is an actual child, this can complicate the hero's sense of morality of how he deals with people. Expect all but the worst of Anti-Heroes to try Defusing the Tykebomb.

Notably this trope is derived from real life, as many cultures took to training elite warriors from early age. Medieval knights were commonly trained from early boyhood by a Knight mentor (the word boy is even derived from a word for "servant"). Middle Eastern mamluks and Turkish Janissaries were relatively similar, as are certain Asian warrior monks. The real life Spartan Way began at age 7, making the trope at least Older Than Feudalism.

See also Little Miss Badass, Child Soldiers, Enfant Terrible, Laser Guided Tykebomb. Can overlap with some types of Super Soldier, especially those brought up in The Spartan Way. For someone who's a literal bomb see Why Am I Ticking? or Action Bomb. May result in Sacrificed Basic Skill for Awesome Training, usually empathy. Not to be confused with Baby Boomers. Contrast Upbringing Makes the Hero.

For kids who are raised to be scientists, musicians, etc. anything other than weapons see Child Prodigy - they're usually far happier with their situation (at least in fiction. Real people forced into being wunderkinds often suffer emotional trauma and burn out before they hit thirty).

For kids who are raised to be good in bed, see Wife Husbandry.

Examples of Tyke Bomb include:

Retrieved from "https://allthetropes.org/w/index.php?title=Tyke_Bomb&oldid=1818358"
Categories:
Cookies help us deliver our services. By using our services, you agree to our use of cookies.