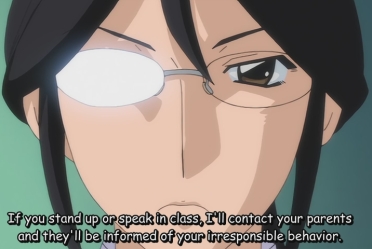 Unlike a Sadist Teacher, the Stern Teacher is always "tough, but fair", a demanding but ultimately Reasonable Authority Figure. For some reason always loved by all his/her students. Happens quite a bit in real life.

The Sergeant Rock is the military version of this.

Not to be confused with the economics instructor in Ferris Bueller's Day Off—that's a Stein Teacher.

As there are too many examples in Real Life, No Real Life Examples, Please

Examples of Stern Teacher include:

Retrieved from "https://allthetropes.org/w/index.php?title=Stern_Teacher&oldid=1511522"
Categories:
Cookies help us deliver our services. By using our services, you agree to our use of cookies.