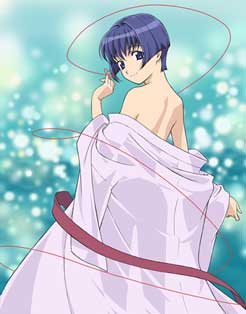 Kaoru Hanabishi, an ordinary college student, runs into a beautiful young woman dressed in an old-fashioned kimono, lost and flustered in the complicated Tokyo subway system. After taking great pains to escort the woman to her destination, he discovers that she is really his childhood friend, Aoi Sakuraba, whom he had promised to marry almost two decades earlier...

Except that the engagement had been annulled by the Sakuraba clan when Kaoru left the Hanabishi clan, after years of abuse from his grandfather. Aoi – who had loved him since childhood and dreamed of marrying him – is unable to accept the annulment and tracks down Kaoru to find out why he doesn’t want to marry her. After they meet up again as adults, and he properly falls in love with her, they decide to reaffirm the engagement but are forced into an unusual situation: in order not to shame the Sakuraba family, they must keep their relationship a secret even as they move into a Sakuraba mansion with the help of Aoi's guardian, Miyabi Kagurazaki.

Sure enough, almost immediately a group of college girls move into the mansion, one by one -- and all of them fall in love with Kaoru. (Except in that some were already in love with him long before the beginning of the series.) Hilarity Ensues, as Kaoru and Aoi (who pose as tenant and landlady) try to keep their relationship a secret.

Ran from 1998 to 2005, with an anime adaptation in 2002 (and a follow-up, Enishi, in 2003). See also Umi no Misaki, the creator's subsequent (ongoing) series, also a harem-based romantic comedy but with very different relationship dynamics.

Tropes used in Ai Yori Aoshi include:
Retrieved from "https://allthetropes.org/w/index.php?title=Ai_Yori_Aoshi&oldid=1963844"
Categories:
Cookies help us deliver our services. By using our services, you agree to our use of cookies.