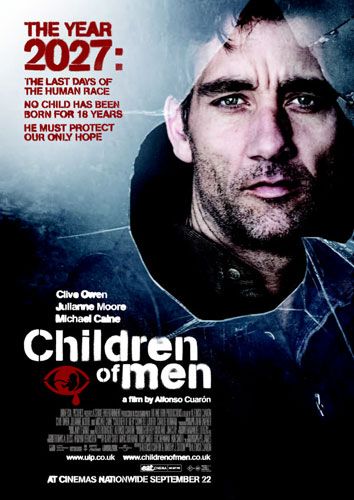 Whether he wants to or not.

Last one to die, please turn out the light.

Children of Men is a 2006 childless dystopian science fiction film co-written and directed by Alfonso Cuaron. It is loosely based on the novel The Children of Men by P. D. James.

It's 2027, and humanity has ceased reproducing for the past two decades. Society is collapsing. It appears that the United Kingdom is the only remaining civilization in the world, and it is a grey and dreary place. Terrorism and refugeeism runs high.

Theo, a white-collar worker, is distracted from his rut when an old girlfriend approaches him for a favor - to help smuggle a refugee to safety. Theo agrees to protect Kee on a dangerous journey, past riots, an oppressive government, and betrayals, to bring her to safety.

Tropes used in Children of Men include:

Jasper: Make sure you call him a 'fascist pig'.