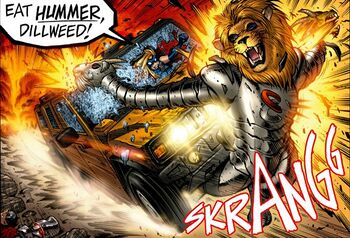 We could make this picture more awesome, but we're really not sure how.

"Captain Hammer threw a car at my head."
—Dr. Horrible

Sometimes, the best weapon you could possibly use isn't the one you hold, it's the one you ride around in. Which kind of makes sense, considering that getting hit by at least a metric ton of metal moving at several kilometers per hour is bound to be painful.

Automobiles are, in fact, the most efficient killing machines on the surface of the planet. To date, the kill count of this invention is totally unmatched. And no, not even guns can be remotely compared. Being killed by a car is a very common cause of Death by Origin Story. How he/she was killed? Car accident. How convenient.

Car Fu is when someone, generally the hero but not exclusively so, uses the car (or van, or bus, etc.) they're driving as large, improvised, moving weapon. More often than not, it's in an attempt to mow down the bad guys, but sometimes it's a bid to make them scatter in an attempt to avoid getting run over.

In a rarer form, Car Fu can also include a car being thrown as a weapon. Or used as a giant club. This version is most often used by superheroes.

See also Toyota Tripwire. If done with ships or spaceships, it's Ramming Always Works. If the car explodes on impact, it's a Molotov Truck. For murder attempts with heavy machinery, see Forklift Fu.

Examples of Car Fu include:

Custer: Ugly fella there just drove a truck into you. Ain't you pissed at him at all?
Saint of Killers: I'll get to him.

Driver: Did I hit something?
Jared Grace: Yes! Thank you!

"How about a bumper sandwich, booger lips?!"

Marcus: Did you see that?!
Mike: They're throwing cars! How can I not see that?!

"You have done well," the other orange fish told him. "Steel is good for weakening Chaos. Aluminum is better still."

Jason: Putties can drive?!
*Putty Patroller floors the gas and drives towards him*
Jason: Whoah, yup, they can drive!

Steve: (referring to a wedding invite) In the field of human relationships, what is the most frightening thing that can come through your door?
Patrick: A Volkswagen.

Miracleman: I'd like to say the car was empty, but that would be a lie.

Car owner: The clutch sticks!
Thing: It's not gonna be a problem. (toss)

Rhino: Let's see how you deal with a car upside the head!

Biker: We both knew it would come to this!