Everything About Fiction You Never Wanted to Know.
< Doctor Who‎ | Recap‎ | S13
Jump to navigation Jump to search 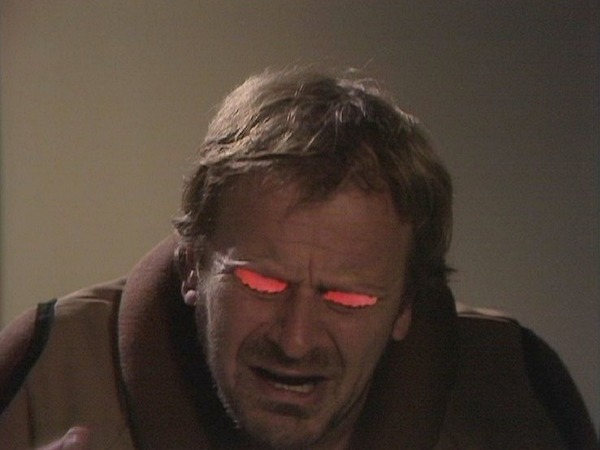 "You and I are scientists, Professor. We buy our privilege to experiment at the cost of total responsibility."
—The Doctor

Investigating a Distress Call, the Doctor and Sarah land on Zeta Minor, where they discover the remains of a geological expedition from Morestra. Only the leader, Professor Sorensen, remains alive, the others all killed by an unseen beast. A Morestran military team has also arrived to investigate, and the "beast" is discovered to be a creature from an Antimatter universe. A pit on the planet acts as a gateway between the universes of Matter and Antimatter, and the creature has been taking revenge for Sorensen's removal of Antimatter samples from around the pit.

The Morestrans attempt to leave, but the Antimatter on board drags their ship backwards, while Sorensen himself becomes infected with the Antimatter and begins to turn into an Anti-man, capable of draining the life from others. The Morestran commander, Salamar becomes increasingly insane and attacks Sorensen with a radiation source, but only succeeds in multiplying him, causing the ship to be overrun with deadly Antimatter creatures.

The Doctor captures Sorensen and takes him and the samples back to the pit in the TARDIS and throws them in. It is revealed that he has made a bargain to this effect with the Antimatter creature, and Sorensen is returned unharmed and the Morestrans allowed to leave.