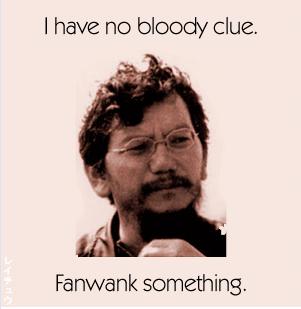 Joy of joys, the authors of your favorite series are answering the fan's questions! Now's your chance to finally get some closure on pressing continuity issues! So you walk up and ask, "Was Bob really a robot?"

Congratulations. Instead of an answer, you just got the Shrug of God.

Before you get angry at them for being evasive, remember that they may have a reason for their ambiguity. Maybe:

Not to be confused with Flip-Flop of God, where the author has a definite answer which has changed over time.

Contrast with the Hand Wave, and "A Wizard Did It", which are given in response to questions about Plot Holes or the workings of a story's Phlebotinum. In contrast, the Shrug Of God is given in response to more mundane questions: questions that should have a simple, straightforward answer. Don't mistake it with Sure Why Not which, while it may come with a shrug from the creator, is quite different.

When the author insists on quashing a theory, see Jossed, which is the opposite. When the author explains but in supplementary material see All There in the Manual. For those stories that are deliberately ambiguous, see No Ending and Riddle for the Ages.

In lieu of a definitive Word of God, someone connected to the production may chime in with the Word of Saint Paul, or anyone with sufficient credibility may offer up the Word of Dante.

Not to be confused with Atlas Shrugged, which, while sometimes confusing, doesn't have a lot of these.

Examples of Shrug of God include:

So there's sufficient leeway for any explanation: having a real minister doesn't automatically make it a real marriage; even if Piggy had all the documentation set up, Kermit could get a decree nisi if it was under false pretences; or maybe they really are married. The Muppets strongly implies the third one, but they subsequently split up.

Retrieved from "https://allthetropes.org/w/index.php?title=Shrug_of_God&oldid=1949185"
Categories:
Cookies help us deliver our services. By using our services, you agree to our use of cookies.