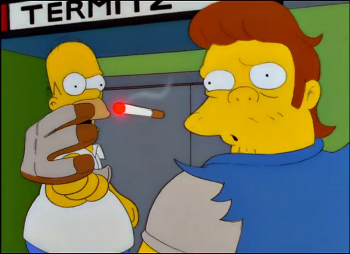 You, Sir, have offended me!

"A glove slap in a little old face will
Get you satisfaction.
Glove slap ba-a-beee

Well, that's the theory anyway. A long time ago, the trope might have been used like this. But these days it's only the stuff of laughter and parody. Chiefly, no doubt, because the chances that the duel will actually be fought are low.

Most of the time this trope is used in such a way that accents the absurdity of the formality. Characters who otherwise have no problem with overt acts of hostility will treat the glove as being somehow significant while still recognizing that The Glove Slap means that everything is now no holds barred.

Historical, or appropriate futuristic or fantasy, settings can still play this in earnest, particularly among the elite.

Compare with Throwing Down the Gauntlet, this trope's Real Life predecessor.

Examples of Glove Slap include:

Hey, what is this? Slap Boris Day?

Mervin, the Sheriff of Rottingham: A fight to the death, mano a mano, man to man, just you and me and my GUARDS!

First of all you don't slap a man! Even when slapping was fashionable. They did it in Paris, a guy would come up they'd be like 'whap-pap' "I challenge you to a duel!" They would have a gunfight after that! Someone had to go!

Christian (who is watching and listening, starts on hearing this name): The Viscount! Ah! I will throw full in his face my. . .
(He puts his hand in his pocket, and finds there the hand of a pickpocket who is about to rob him)
Hey?

Cyrano: I wear no gloves? And what of that?
I had one,. . .remnant of an old worn pair,
And, knowing not what else to do with it,
I threw it in the face of. . .some young fool.