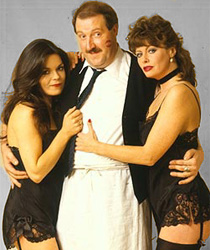 Frankly, I don't understand why he is so popular with the ladies

Very much a parody of Secret Army, it starred Gorden Kaye as René Artois, owner of a restaurant (who broke the Fourth Wall with his monologues to camera at the beginning of every episode) and a whole host of other characters.

Beyond that, however, the show was notable for various things:

Tropes used in 'Allo 'Allo! include:
Retrieved from "https://allthetropes.org/w/index.php?title=%27Allo_%27Allo!&oldid=1845165"
Categories:
Cookies help us deliver our services. By using our services, you agree to our use of cookies.