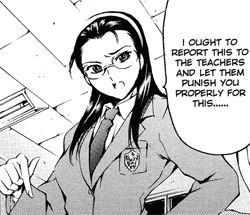 Yes, this. No browsing All The Tropes in the classroom!

She is smart, poised, caring, and she butts her nose in where no one wants it.

The Class Representative is disturbed by how the lead or their friends don't participate in club activities or how their grades are slipping and never gets the hint that nobody cares about that stuff. Can be The Smart Guy. Usually this character is female.

Frequently admonishes the cast for small mistakes, helps makes up for the Two-Teacher School, and is the class's representative (hence the name) on the Absurdly Powerful Student Council. An Anime example will almost always called "iinchou" ("class rep") or in a classic Latin American Soap Opera example, is always called in Spanish "Jefe(a) de Grupo/Clase" (Group/Class Boss) in place of her real name. In British schools (and in some countries that were part of the empire), these are known as "Prefects" (Schools with more than one also tend to have a "Head Boy" and "Head Girl" who are in charge of the rest of them) and tend to have a square or shield shaped badge pinned somewhere on their uniform to identify them (all of which is Truth in Television, although not all schools have them and they don't have anywhere near as much responsibility as they used to).

Sometimes can be an approachable authority when the protagonist gets into a mess, but doesn't want to involve the adults. In this case expect the protagonist to develop a new respect for the Class Rep.

Lately has started appearing as a member of the Unwanted Harem.

Can initiate a Selective Enforcement plot by catching the small offense.

Examples of Class Representative include:

Also, Manaka Komaki from To Heart 2. Though she's more of a class rep on paper, as she fails to manage the class properly. She's a Hot Librarian though...

In the third game, this is used to Geo's benefit in the postgame quest. Taurus Fire R attempts to impersonate Bud to keep Geo from attacking him by stating he learned about a virus outbreak by Luna. Failing to call her "Prez" confirms Geo's suspicions about his identity.