Jump to content
(Redirected from Umineko no Naku Koro ni) 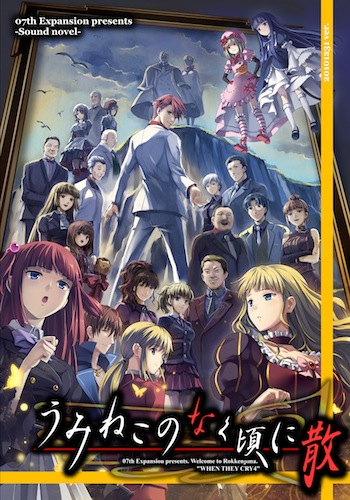 Umineko no Naku Koro Ni (When the Seagulls Cry) is a kinetic sound novel that takes place in 1986, on the island of Rokkenjima. The rich Ushiromiya family is gathering in order to discuss what will happen to patriarch Kinzo's inheritance, since he has been ill in recent days.

While the arguments about the inheritance ensue, a typhoon traps all eighteen people on the island. The family then finds a mysterious letter from a person claiming to be Kinzo's alchemy councilor, the Golden Witch, Beatrice. Beatrice claims that she has been summoned by Kinzo to claim the inheritance, as the family has been deemed unworthy of it. Unless someone solves the riddle of the epitaph on her portrait before midnight on October 6th and becomes the family successor, Beatrice will claim everything that the family owns, including the ten tons of gold that Kinzo claims will be given to the successor.

Naturally, this sows chaos among the family members as each one of them argues about who will succeed the family. As the weekend continues, mysterious murders start picking off the family one by one. By the time the typhoon is over and the seagulls start crying, none of them will be left alive.

The protagonist, Battler, then gets challenged by the Golden Witch, who claims that she killed everyone on the island. Were the murders committed by magic, or were they done by a human?

Similar to its predecessor, Umineko no Naku Koro Ni consists of several arcs with the same scenario repeating for mysterious reasons. This time, the plot focuses on the murders that occur on the island and trying to figure out who kills everyone, how they all died, and why they were all killed. The first four arcs are the Question Arcs, where the puzzles are presented to the reader. Instead of outright Answer Arcs, the last four arcs are the Core Arcs, which provide the reader several hints on how to solve the murders, but without outright giving away the answer.

Part of the When They Cry series, which also includes Higurashi no Naku Koro ni.

The series currently consists of a sound novel, a manga, and an anime. The sound novel is 8 Episodes in length, along with two fandiscs, Umineko no Naku Koro ni: Tsubasa (When The Seagulls Cry: Wings) and Umineko no Naku Koro ni: Hane (When The Seagulls Cry: Feathers) containing extra short stories called TIPS that don't fit into the main story. Each Episode is adapted into a manga, with the first four Episodes completed so far and the last four (and Tsubasa) still ongoing publication. In addition, the anime adaptation by Studio DEEN spans 26 episodes, but only covers the first four arcs.

Summaries of each arc may be found at the When They Cry page. Please put character-related tropes on the Character Sheet. Also check out the Nightmare Fuel page and the massive WMG page. And if it doesn't go anywhere there, it probably goes on the Trivia Page.

Be wary of the terms used on the Umineko pages -- "Episode/EP" (with a capital "E") refers to a Story Arc of the novel, while "episode" refers to an episode of the DEEN anime.

On the fourth twilight, gouge the tropes and kill:

When the seagulls cry, none are left alive.

Retrieved from "https://allthetropes.org/w/index.php?title=Umineko:_When_They_Cry&oldid=1969831"
Categories:
Cookies help us deliver our services. By using our services, you agree to our use of cookies.