Everything About Fiction You Never Wanted to Know.
(Redirected from Moby Dick)
Jump to navigation Jump to search 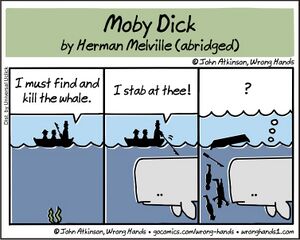 Now that we're caught up on what everybody knows, onward to the article.

Described by many as the greatest American novel, Moby-Dick; or, The Whale, by Herman Melville, is either a story about the hunt of a wicked whale by a madman that shows Melville's work, or an encyclopedia on whaling and cetology with a Framing Device. You choose.

Either way, the plot follows a man that, infatuated with the sea (apparently, it's a periodical thing), decides to go aboard a whaling ship to try out how whaling feels. He and his newly-met best friend Queequeg go upon the Pequod under the command of the monomaniac Captain Ahab, and eventually get in the middle of his maniac hunt for Moby Dick, the eponymous "White Whale" that ate his leg. Tragedy ensues.

Moby-Dick is full of symbolism, and much more has been added by later commentators. Common meanings for the whale, for instance, are: nature, fate, the ocean's fury itself, Ireland and God (as an invincible opponent who is never actually overcome at any point in the story).

This book is part of the Hollywoodian Small Reference Pools. Despite any real-life literary merits, it is convenient shorthand for "huge boring Doorstopper assigned for reading by high-school teachers" in any given kids series. Whether this also implicitly states that execs think that Kids Are Morons is debatable.

Moby Dick has been adapted to screen several times, the most famous version being with Gregory Peck as Ahab. Patrick Stewart was inspired to play the role following an allegorical comparison to Ahab in one of his movies.

Tropes used in Moby-Dick include:
Retrieved from "https://allthetropes.org/w/index.php?title=Moby-Dick&oldid=1706097"
Categories: