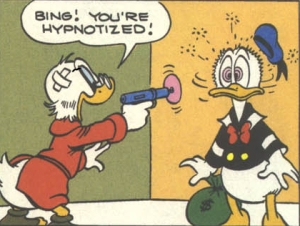 This is the device that the villain (usually) will use to keep the hero, townspeople, or Mr/Mrs. Random Supporting Character in thrall. It has been used countless times in stories across many different types of media. Plot Device, MacGuffin, and even a key part of a Very Special Episode.

While these devices tend to fall into two general categories, either broadcasting "hypno-waves" at any luckless viewer for a one-time treatment, or are somehow attached to the victim's body (usually the head), they ultimately know no shape and can come in nearly any specific form:

That sword you just picked up? Hope you like being a slave to the evil overlord.

That mask that looks so good on you? Hope you can control the demonic power inside.

That bracelet the street vendor gave you? Welcome to the most dangerous cult in the world.

See Mind Control, Mind Control Eyes and More Than Mind Control for the effects of these devices. May be the result of televising a person with the power of Hypnotic Eyes. Subtropes include: Subliminal Seduction, Hypno Ray, and Hypno Trinket. See also: Power Perversion Potential for the inevitable result in some viewers. May require the target to be Forced to Watch a transmission of some kind.

Examples of Mind Control Device include:

Retrieved from "https://allthetropes.org/w/index.php?title=Mind_Control_Device&oldid=1800576"
Categories:
Cookies help us deliver our services. By using our services, you agree to our use of cookies.