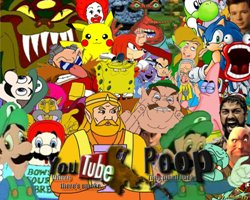 And these are just some of the many characters that are regularly "pooped".

YouTube Poop (often referred to by its shorthand, "YTP") is a Neo-Dada art form consisting of video remixes that are edited from a large array of video clips in order to confuse, stun or entertain the viewer. The source material can be mashed all together into a nonsensical Crossover story, or just repeat footage of the characters gesticulating oddly or apparently saying something dirty over and over and over again. There are also well-known phrases such as "PINGAS" or "Do a Barrel Roll!".

YouTube Poop started with SuperYoshi testing out Windows Movie Maker, a new piece of software he found in his newly installed Windows XP, using the episode "Recycled Koopa" from The Super Mario Bros. 3 cartoon. The result was a video containing a few clips from the episode repeated and used in a random manner. Later he put this video as The Adventures of Super Mario Bros. 3 Remixed on December 22, 2004, up on his SheezyArt page. The video was well received and SuperYoshi together with his friend RetroJape made similiar remixes using The Megaman Cartoon and later Adventures of Sonic the Hedgehog. A few more of SuperYoshi's friends joined and started putting their videos on YouTube in order to confuse and anger people who were otherwise looking for regular Super Mario or Sonic the Hedgehog videos. The first three Poops have been brought to YouTube later as I'D SAY HE'S HOT ON OUR TAIL, Dr. Light's Guidance System Show and Robotnik's Sodomy Fest of 2005, respectively.

Interestingly, three precursors to the YouTube Poop can be found in Daffy Duck in Hollywood, a 1938 short in which Daffy edits a film reel to produce this, Hockey Homicide and Cult Toons, a TV show made for Cartoon Network UK that mixed old Hanna Barbara cartoons like The Perils of Penelope Pitstop with wrestling, kung fu and blaxploitation movies for cheap laughs. Richard Nixon even put out an attack ad on Hubert Humphrey in the 1968 presidential campaign that bears a surprising similarity to Poop conventions.

It was not until people like The Electric Cheese got to know about these videos and started making ones themselves that the term Youtube Poop was used for them and that they increased in popularity.

With the growing popularity YouTube Poop shifted from being videos that confuse people who were looking for regular videos (in fact, the people who started it are more fond of "WTF?" comments than people commenting or repeating the parts they liked in the video and were dismissive of the term Youtube Poop for a long time) to videos that entertain people by using video sources that have become iconic with the name Youtube Poop.

And now even The BBC are getting in on it!!

See also Montage Parody, a more recent form of remix videos with a larger emphasis on video games and memes.

Have a gander at the Forums and Wiki.

Other Popular YouTube Poopers are:
Other variations/sub-fads include, but are in no way limited to:

Sentence-Mixing is something that has grown to be very popular in the YouTube Poop world. This is where they make a character say a completely different phrase by mixing around all his lines. Here are a few examples of some sentence-mixed jokes:

Zelda The Wand Of Gamelon

Link The Faces Of Evil

Adventures of Sonic the Hedgehog

One Hundred and One Dalmatians: The Series

Beauty and the Beast

Too Smart for Strangers

The Hunchback of Notre Dame

My Little Pony: Friendship Is Magic

Tropes commonly invoked with these videos:
Retrieved from "https://allthetropes.org/w/index.php?title=YouTube_Poop&oldid=1924534"
Categories:
Cookies help us deliver our services. By using our services, you agree to our use of cookies.