Won't Work On Me 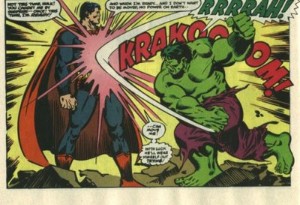 Superman, we know you're the top Face and all, but come on.

In Speculative Fiction, there are a lot of ways for characters to resist the Stock Super Powers of their adversaries and nullify said opponent's resistances to one's own powers. These can come in the form of powers themselves, such as a Power Nullifier disabling other people's powers, or Elemental Rock-Paper-Scissors. Other times, a hero is just so determined that they can Fight Off the Kryptonite and use their abilities in unfavorable circumstances. Resourceful characters may discover an enemy's Achilles' Heel or Weaksauce Weakness, or lure them onto unfavorable Geo Effects.

Or they might just say, "Your power doesn't work on me."

For whatever reason, some characters can just ignore other character's powers on a whim. They might be naturally immune to every kind of magic, or their abilities are 'too powerful' to be resisted. Whatever the case, other characters' powers don't work on them and their own powers are unimpeded in the least. If heroes attempt to use The Worf Barrage, they'll step out of the Smoke Shield and casually dust themselves off. When the Barrier Warrior tries to block their attacks with a Beehive Barrier, they'll break it into hexagons and knock them out. It can also take the form of a wrestler using their ultimate move and eliciting little more than a raised eyebrow from their Made of Iron opponent.

They aren't canceling their opponent's powers, and they often aren't explicitly stated to be immune or resistant beforehand. They're just that good. Almost as if it were a make believe children's game where one of the kids refuses to "play by the rules" and insists they're invincible and immune to their playmate's imaginary powers. But that's impossible... Right?

Depending on execution, this can be a terrifying reminder of exactly why they're called the BIG Bad, or a very groanworthy way of adding Fake Difficulty for a hero. In fact, heroes only very rarely get the benefit of this trope. If a villain has benefited from No Sell for the first four acts, by the time the hero masters his powers/confidence in the fifth, it's likely that he'll be the one using No Sell along with a Super Mode or Heroic Resolve.

In Professional Wrestling circles, this is called "no-sell". In all types of acting, "selling" means an actor reacts as if he had been hit hard when the attack actually didn't even make contact (or was harmlessly light). Professional wrestling refers to it as a "no-sell" when the wrestler that was struck doesn't react to the hit (i.e. he just stands there, as if his opponent were punching a brick wall). Some wrestlers use no-selling as their entire schtick.

Compare Kung Fu-Proof Mook, which is when mooks do this, Punch-Punch-Punch Uh-Oh, where the attacker uses hand-to-hand attacks instead of special powers, and Shooting Superman, for when this crosses over with Idiot Ball. Also see Contractual Boss Immunity and Useless Useful Spell for related video game mechanics. See Disability Immunity for cases when the attack happens to be not applicable to the victim rather than counteracted. See also Cross-Melting Aura for a way especially evil creatures No Sell their Weaksauce Weakness to holy items. A favorite of the Implacable Man and The Juggernaut.

The inversion is No Saving Throw (for when the attack always works) or Shooting Superman (for when you're the attacker).

Examples of Won't Work On Me include:

Generally, immunities to specific attacks and/or Standard Status Effects are almost always present and are the main purpose of Damage Typing. As a game model grows, it's more and more likely to get into Lensman Arms Race of effects, immunities and immunity-breaching effects.

Retrieved from "https://allthetropes.org/w/index.php?title=Won%27t_Work_On_Me&oldid=1958831"
Categories:
Cookies help us deliver our services. By using our services, you agree to our use of cookies.