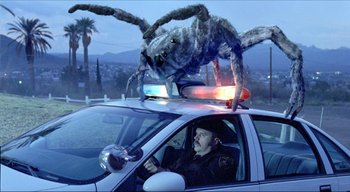 "Dispatch, we have a problem."

Arachnophobia is probably the second-most popular phobia (after coulrophobia, that most tired of plot devices), and even non-arachnophobes have to admit that spiders can be pretty freaky. Therefore, the most popular form of Big Creepy-Crawlies, and one of the most popular Fifty Foot Whatevers to attack has to be a big spider. (Don't click the link if you like to browse All The Tropes before bed.) The bigger they are, the less likely there are to be more of them, but they're almost all so big that they logically shouldn't be able to move or breathe. They will usually have hypertoxic venom, both spin webs and hunt for prey, and spit silk out of their mouths (most spiders in real life only focus on one trait).

Needless to say, they can be a bit of a problem for viewers that really are arachnophobic, especially in video games with them as a featured enemy. Many games get around this by making the spiders relatively cartoonish, or not having them correspond to any real life spiders. Granted, they can still be freaky due to the sheer nature of being giant spiders.

They usually have little personality, beyond vague malevolence. Some of them can talk, but they're rarely very loquacious. Sometimes, they're just ordinary spiders who meet up with a protagonist who is small, although it amounts to the same thing. Crossed over with Humongous Mecha, you get the Spider Tank.

Not to be confused with Demonic Spiders, who are just difficult enemies (though sometimes a giant spider is a demonic spider), or Money Spiders, which are just enemies that have money even though they logically shouldn't (though again, Money Spiders can be literal spiders).

Examples of Giant Spider include:

SHE JUST WANTS TO GIVE YOU A HUG!

Retrieved from "https://allthetropes.org/w/index.php?title=Giant_Spider&oldid=1965276"
Categories:
Cookies help us deliver our services. By using our services, you agree to our use of cookies.