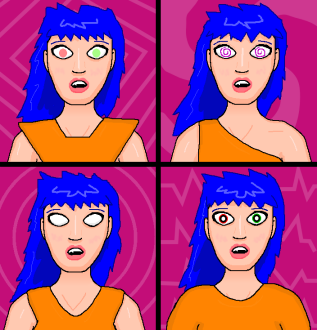 You are getting sleepy..

A character who is performing or under the influence of hypnotism or mind control will show this influence in his or her eyes with a visual change. This is mostly for the benefit of the audience. While people around the character may note they're "acting a little funny", usually nobody In-Universe ever notices the change.

In live-action and some forms of animation, the standard signal for mind control or possession is totally black or totally white eyes. In many Western cartoons and comics, hypnosis is represented by the eyes appearing as swirling spirals or concentric circles. Sometimes it's also represented by changes in the dilation of the pupil; the pupil will either get really small, or really large. In Anime, their irises become dull, flat disks of their base color without any detail, highlights, reflections or even pupils. Obviously heavy eyelids surmount the altered eyes, and sometimes drift into a half-closed position.

A rare variation involves severe walleye in both eyes. This is a Shout-Out to a traditional Japanese artistic device: a character performing superhuman feats of swordsmanship (Musashi slicing arrows out of the air... as they're coming at his back) will be depicted as severely cross-eyed, indicating that they are using "inner guidance". Another extremely rare variation is sometimes where the pupil remains the same but the sclera (the white part of the eye) may change color.

It should be noted that in Real Life, hypnotized people's eyes are likely to dilate (i.e. the pupils get a bit bigger.) This is apparently not subtle enough for animation, which prefers to Open the Iris. Also note that some art styles have eyes with less detail than others, and so the eyes may have some of these traits already; this doesn't make them an example of this trope.

This also counts as Nightmare Fuel for some people. Not to be confused with Hypnotic Eyes, which is about people who can hypnotize others just by looking into their eyes. See also Red Eyes, Take Warning, which may be a form of this.

Examples of Mind Control Eyes include:

Retrieved from "https://allthetropes.org/w/index.php?title=Mind_Control_Eyes&oldid=1705920"
Categories:
Cookies help us deliver our services. By using our services, you agree to our use of cookies.