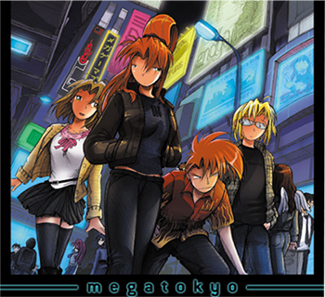 One of the most successful Web Comics around, and one of the easiest to find in brick-and-mortar bookstores. Also one of the most confusing. Starts off when two American video game otaku -- Piro and Largo -- hop on a one-way flight to Japan, then find themselves unable to get back after a credit-card-maxing shopping spree.

Has gained a great deal of infamy for its erratic schedule, along with the Dead Piro Days (DPDs) and stick-figure Shirt Guy Dom (SGD) comics (a takeoff on the "Shirt Guy Tom" comics from Sluggy Freelance). Recently the illness of the author's wife has made a realistic schedule even harder to produce.

Has been called the Lost of webcomics for its complex plotline and character histories, most of all the enigmatic Tohya Miho. Has also been called The X-Files of webcomics, for the same reasons, but not as positively. Quite intentionally, it includes a number of anime tropes. Interesting to note, however, is that it is one of few works who take flak for being Trope Overdosed.

Can be found through this link here. In 12 different languages, although each language is at a different point in the story.

And it also has a wiki.

Tropes used in Megatokyo include:
Retrieved from "https://allthetropes.org/w/index.php?title=Megatokyo&oldid=1958640"
Categories:
Cookies help us deliver our services. By using our services, you agree to our use of cookies.