Metal Arms: Glitch in the System

Everything About Fiction You Never Wanted to Know.
(Redirected from Metal Arms)
Jump to navigation Jump to search 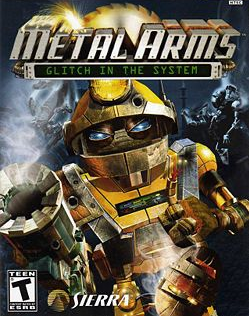 Metal Arms: Glitch In The System is a third person shooter released in 2003.

The story begins on the war torn planet Iron Star which, as fate would have it, is populated completely by robots. Under Colonel Alloy the Droids have formed a resistance against the Milbot forces of the evil General Corrosive. On a routine patrol a robot of mysterious origin is discovered by the rebels and brought back online to aid against the Mils. Having no memory other than his name 'Glitch', he is quickly called into action to aid his new allies.

Much ass kicking follows as Glitch, unsurprisingly, turns out to be quite handy blowing enemy mooks to pieces. What follows is 42 missions of shooter action featuring some vehicular destruction, controlling ally characters and hacking enemies for good measure. Due in part to its limited commercial success and its reputation for being unkind to the casual gamer it's something of a under-rated gem for its fans. For those who got past the tough gameplay there was a lot to like. Fun characters, novel weaponry and a light-hearted story made for a unique third person shooter.

Tropes used in Metal Arms: Glitch in the System include:
Retrieved from "https://allthetropes.org/w/index.php?title=Metal_Arms:_Glitch_in_the_System&oldid=1611427"
Categories: