Out of the Inferno 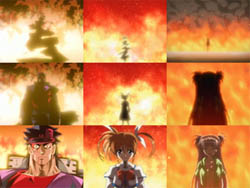 One level more Badass than the Smoke Shield. Basically, everything around someone just explodes and catches on fire. No One Could Survive That.

Yes, yes they could. And they're slowly walking out, an Unflinching Walk, because the fire doesn't even bother them. We see their shadow first and only then do they emerge. This is your signal to run, run fast and run far. Frequently the end result of The Worf Barrage. If they're more powerful for it, you face Infernal Retaliation. Related is when we "cut" to inside the flames, or show the flames die down, with the victim unharmed. Usually performed by the Implacable Man.

A very old trope, to the point that "passing through the flames" and being unharmed/transformed is a classic metaphor.

Through the Fire and Flames has nothing to do with this trope, but could possibly be a cause of it.

See alse Outrun the Fireball, for the Not So Stoic version.

Examples of Out of the Inferno include:

Retrieved from "https://allthetropes.org/w/index.php?title=Out_of_the_Inferno&oldid=1702816"
Categories:
Cookies help us deliver our services. By using our services, you agree to our use of cookies.