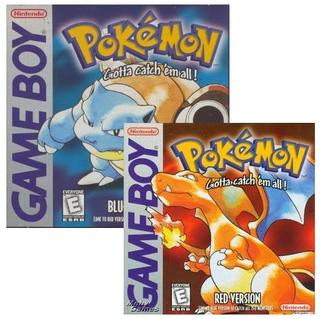 The first installments of the Pokémon franchise hit the Game Boy in 1996 in Japan (as Red and Green; see below) and in 1998 in North America. Taking place in Kanto based on the Japanese region of Kanto, the plot is simple: you, an eleven-year-old with a Nice Hat, are offered your very first Pokémon by Professor Oak, the local authority on Pokémon. He gives you a choice of three different types: Bulbasaur, Charmander, or Squirtle. His own grandson, your long-time Rival, gets second pick, and takes advantage of this to snag whichever one happens to be strong against your chosen partner.

In exchange for your first Pokémon, Oak wants you to run an errand for him: travel around the world (or at least the whole region of Kanto) and collect as many different Pokémon as you can, recording all of them in your Pokédex. Of course, along the way, you're more than welcome to challenge the eight Gyms, collect their badges, and take on the Elite Four in hopes of becoming the Champion. Then there's the emerging threat of Team Rocket, a proudly evil organization that uses Pokémon for its own selfish ends. Somebody's gonna have to deal with them, too -- and who better than an eleven-year-old and his team of trained monsters?

While the game's balance is undeniably broken (Balance? Psychic types LAUGH at your pitiful thoughts of BALANCE!), and glitches abound (Missingnoooooo!)...it's Pokémon.

It should be noted that in Japan, the first two games were released as Red and Green. Blue was released later as a third version, with a bit of a graphical improvement over the originals. For the international releases, the names Red and Blue were used. Although the Japanese Blue provided the graphics and game script for translation, the Japanese Red and Green provided the wild and version-exclusive Pokémon for the international Red and Blue respectively. This makes the Japanese Blue the only main series game to lack an international release.

As evidence of its incredible popularity, Pokémon Yellow was later released as a fourth version in Japan in 1998, and as a third version in North America in 1999. Yellow took elements from the TV series and transported them back into the games, however loosely. Instead of picking one of the usual trio, a wild Pikachu ends up as your starter, and follows you everywhere rather than get into the usual Poké Ball. The familiar Team Rocket trio also show up.

Jump ahead a couple gens, and Red and Blue reappeared once more in the form of their Video Game Remakes on the Game Boy Advance: FireRed and LeafGreen. These allowed players to relive the classic games with many of the new benefits, tweaks, and balances of the second and third gens, though it took some Retconning here and there, and added in some new areas to explore after finishing the familiar challenge.

Another detail worth noting is that many of the tropes listed under Red and Blue's category also apply to Yellow, FireRed, and LeafGreen.