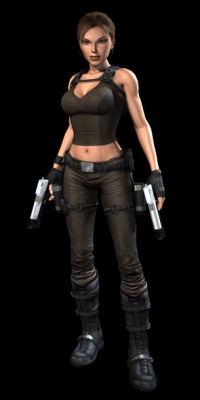 "Check out those bazookas!" "You idiot, she's wielding pistols."

Tomb Raider is a media franchise (mostly video game based) starring an Adventurer Archaeologist named Lara Croft. In most of the games, she travels around the world looking for highly prized treasures while avoiding rival hunters, wildlife, and various death traps.

Since its debut in 1996, the video games have sold millions of copies around the world, and have spawned a series of comic books, a pair of movies, and an animated series.

The first six games were created by British developer Core Design, but when the series began to decline and an attempt to give it a Darker and Edgier makeover failed, the publisher handed it over to an American development studio, Crystal Dynamics (who were largely responsible for the Legacy of Kain series).

In 2009, Crystal Dynamics became a subsidiary of Square Enix (yes, that Square Enix).

The Crystal Dynamics era Lara, for these games, is voiced by British actress Keeley Hawes. That Keeley Hawes.

Three live-action films based on the franchise have been made, starring Angelina Jolie as Lara Croft. The films depart from the games in several plot departments, but Lara stays pretty much the same. The first film, Lara Croft: Tomb Raider, was released in 2001; Lara is off looking for the Triangle of Light, which the Illuminati seek in order to control time. The second film, Lara Croft Tomb Raider: The Cradle of Life, has Lara in search of Pandora's Box. The third film stars, Alicia Vikander, an Oscar winning actress, and will be based on the 2013 reboot.

The following tropes are common to many or all entries in the Tomb Raider franchise.
For tropes specific to individual installments, visit their respective work pages.
Retrieved from "https://allthetropes.org/w/index.php?title=Tomb_Raider&oldid=1929059"
Categories:
Cookies help us deliver our services. By using our services, you agree to our use of cookies.