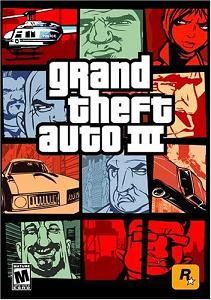 In Liberty City, a Fictional Counterpart to New York, you play a silent, nameless [1] protagonist who escapes from a prison transport and climbs the city's criminal ladder. You are hoping to get revenge your ex-girlfriend/partner in crime Catalina, who left you for dead after a bank robbery gone bad. It won't be an easy journey. Some will backstab you, and others will think you are in the way. But if you fight the good fight, this will be one hell of a ride.

This game burst onto the scene in 2001, completely overhauling the series by bringing it into a 3D environment, popularizing the Wide Open Sandbox genre and turning Rockstar into its namesake. Although further games would add polish, few sequels deviate too much from this winning formula.

Released on PlayStation 2, then on the Xbox and PC, and eventually got released on iOS and Android.

Tropes used in Grand Theft Auto III include:
Retrieved from "https://allthetropes.org/w/index.php?title=Grand_Theft_Auto_III&oldid=1730272"
Categories:
Cookies help us deliver our services. By using our services, you agree to our use of cookies.