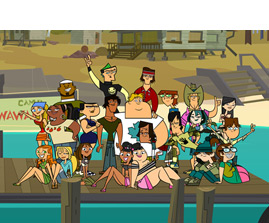 A popular Canadian animated series produced by Teletoon from the creators of 6teen. The show is about 22 teens who sign up to star on a reality show similar to Survivor called Total Drama where they are divided into teams and given challenges every three or so days; whenever a team loses a challenge they have to vote one of their members off the show, after a handful of contestants from either opposite team are eliminated (in a combined total between both teams), the teams merge and the remaining contestants compete as individuals and engage in a free-for-all where it's every man (and woman) for themselves. The last contestant standing wins C$100,000, however from "Total Drama Drama Drama Drama Island" and Action onwards the prize money has been changed to C$1,000,000.

The first season, Total Drama Island, takes place at Camp Wawanakwa, a campsite located on an island in an unspecified area in Muskoka, Ontario.[2]

Since the show incorporates New Season, New Name, the second season was called Total Drama Action and lowers the contestant count to 14 (that is until Courtney joined in as a late entry, for legal reasons, increasing the number to 15) and takes place on an abandoned film lot somewhere in Toronto.

The third season, Total Drama World Tour, has 15 old contestants and 3 new ones travelling to different locations all around the world and bursting into impromptu musical numbers when prompted.

The fourth season, Total Drama Revenge of the Island, features an all new cast of 13 contestants and takes place at a now radioactive Camp Wawanakwa.

Part one of the fifth season, Total Drama All-Stars, not only contains 14 returning contestants from previous seasons, but also has a Heroes vs. Villains setup. Also, like the previous season it takes place at Camp Wawanakwa, the only difference is that the island's been cleaned up since the end of Revenge of the Island and is toxic waste free once more.

Part two of the fifth season, Total Drama Pahkitew Island,features 14 new contestants, and (following the sinking of Camp Wawanakwa at the end of All Stars) also takes place in a new island located somewhere in Western Canada (British Columbia).

A spinoff series set in the same universe called Total Drama Presents: The Ridonculous Race, features new contestants competing in teams of two, some of the past characters from the main series also make appearances.

Tropes used in Total Drama Island include:
Retrieved from "https://allthetropes.org/w/index.php?title=Total_Drama_Island&oldid=1965076"
Categories:
Cookies help us deliver our services. By using our services, you agree to our use of cookies.