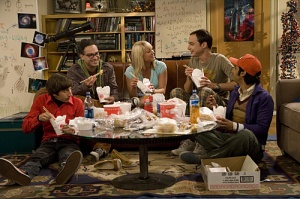 Yes, this is a picture from a show named after the Universe-Starting Kaboom.

The Big Bang Theory is a CBS Sitcom, which debuted on September 24, 2007 and ended on May 16, 2019, with four genius level friends (ranging from theoretical physics to engineering) and a pretty girl who shakes up their normally scientific method-filled life.

The main characters are two Odd Couple roommates, Leonard Hofstadter and Sheldon Cooper. Leonard is a mild-mannered Nerd who, although awkward, is still socially capable. Sheldon is an egomaniacal supergenius who displays signs of OCD, ADHD and Asperger's Syndrome.

A cute new neighbour called Penny moves in next door, and Leonard almost instantly develops a crush on her. Penny is a perfectly normal person with an average intelligence level, but is seen as a Dumb Blonde compared to Leonard and Sheldon.

Rounding out the cast are two other genius geeks who are always visiting Sheldon and Leonard: Howard Wolowitz, a a wild but unsuccessful womanizer who never stops hitting on Penny; and Rajesh "Raj" Koothrappali, who suffers from crippling shyness whenever attractive women are around (unless he's drunk or otherwise intoxicated).

The show's humor can be divided into three categories: obscure references to physics or Geek culture (including discussions of the Three Laws of Robotics and the metaphysics of teleportation), every Nerd stereotype the writers can think of (including Halo, Star Trek, Star Wars and Basement Dwellers) and the culture clash between Penny and the guys (after Sheldon tries to explain what semiotics is, Penny replies "Okay, sweetie, I know you think you are explaining but you're not!").

And for the most part the scientific and nerd references are accurate, or at least close enough that somewhere between the writing and the acting someone knows what they're talking about. As for the show's drama and overarching plot, most of that relies on UST between Leonard and Penny. The series almost runs on Give Geeks a Chance.

Starting in season four they added two new characters as semi-regulars, Bernadette Rostenkowski (Microbiologist) and Amy Farrah Fowler (Neurobiologist). Bernadette was Penny's friend and co-worker who began dating Howard. Amy is a female counterpart and asexual love interest to Sheldon accidentally discovered through an online dating service prank. While they are also extremely intelligent, they ended up forming a trio with Penny that contrasts the four guys and gives a new female perspective on the show.

Tropes used in The Big Bang Theory include:

Retrieved from "https://allthetropes.org/w/index.php?title=The_Big_Bang_Theory&oldid=1959497"
Categories:
Cookies help us deliver our services. By using our services, you agree to our use of cookies.