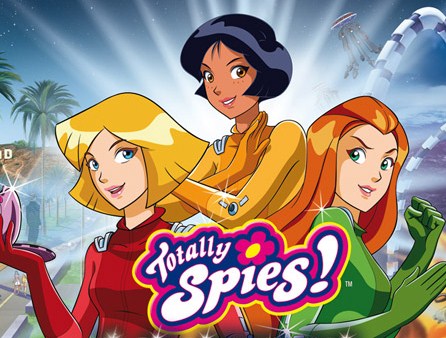 Totally Spies! (2001-2014) is an animated show produced by French company Marathon Media. Three action girls -- Alex, Clover and Sam (two Tomboyish Names out of three) -- are (totally) spies (and also Ordinary High School Students) working for WOOHP, the World Organization Of Human Protection. In each episode, the girls battle the plans of some variety of Mad Scientist or Super Villain with an axe to grind while also dealing with their personal lives (including their collective high school rival Mandy). Like Kim Possible, Totally Spies! mines both spy and teen clichés, though Kim Possible was the only show to end a season on a Cliff Hanger.

Totally Spies! is notable for being one of the first Western-made animated series to employ selected Japanese Visual Arts Tropes, such as Cross-Popping Veins and The Sweat Drop, under the assumption viewers were already familiar with them (as opposed to employing them to evoke the anime style, a la Teen Titans).

The show is also notable for being a treasure trove of Author Appeal; each episode was seemingly dedicated to at least one different type of fetishes. Each of the three spies has their own specialty: Clover is the designated hostage and is frequently a victim of various transformations, Alex has freakishly bad luck, and Sam will often be Brainwashed. At times, Jerry also seems to take a little too much joy in tossing the girls into dangerous situations.

In short: Charlie's Angels meets Sailor Moon with more Fetish Fuel than either of those shows ever had.

The show totally received a movie, as well as a Spin-Off (The Amazing Spiez).

Tropes used in Totally Spies! include:
Retrieved from "https://allthetropes.org/w/index.php?title=Totally_Spies!&oldid=1845147"
Categories:
Cookies help us deliver our services. By using our services, you agree to our use of cookies.