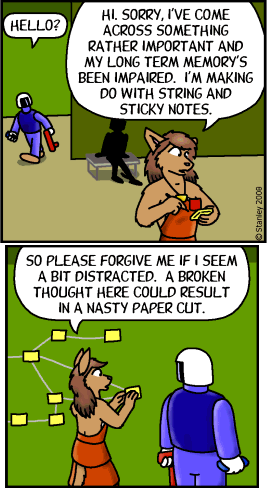 Fixing robots can be hard if you forget the robots exist halfway through the operation.

Memo to myself: Do the dumb things I gotta do


Touch the puppet head
—They Might Be Giants, "Put Your Hand Inside the Puppet Head"

I know you may find this hard to believe, but it was actually you who wrote this page. Upon learning of a Government Conspiracy (though it could have very easily been an Ancient Conspiracy), you decided to investigate. Unfortunately for us (remember, I am you from the past), the local Big Bad found out and decided to make you forget everything through Laser-Guided Amnesia, even implanting Fake Memories to throw you off. As he warmed up his Applied Phlebotinum, you quickly scribbled this page on the first piece of available medium you found. It could have been ourself, a piece of paper, the floor, a videotape, or the back of a DNA-tracking device. If you're wondering why you chose a wiki where anyone can get at this note and alter it, well... it was there.

As proof that this isn't some sort of elaborate hoax, I'll mention that weird dream you had when you were ten involving the Care Bears, even though that only works if you still have at least some memories left. There, now you know that I am you.

Without this piece of evidence, you can't continue your battle against the big unknowing evil. Waking up with this message could be the beginning of a series (if you lived in a TV show, which you don't) or a defining trait of your character. Knowing of the existence of this conspiracy could very well turn you into Agent Mulder, as you will immediately believe it was you that wrote this, even if some people say those who suffer from amnesia have trouble accepting they DID write something. It's like a Memory Gambit, except it's a last ditch effort rather than premeditated as part of a convoluted plan.

While you may not even know your own name, this is, for all we care, a Call to Adventure!

Ted: That is a tough problem. You know who'd know how to solve that one?
Marshall: Who?
Ted: Future Ted and Future Marshall.
Marshall: Yeah, let's just let those guys sort it out.

Marshall: Damn it, Past Marshall!

[Regarding the length of the tattoo]No wonder my back hurts; there's a damn novel written on it.

P.S.: The conspiracy is as follows - the government is run by reptilian aliens, Sasuke is Naruto's time-traveling father, you're a Time Lord and Everyone Is Jesus in Purgatory. Also, the Big Bad found us on the way to the supermarket. Get milk, soda, chocolate syrup, and a block of sharp cheddar.