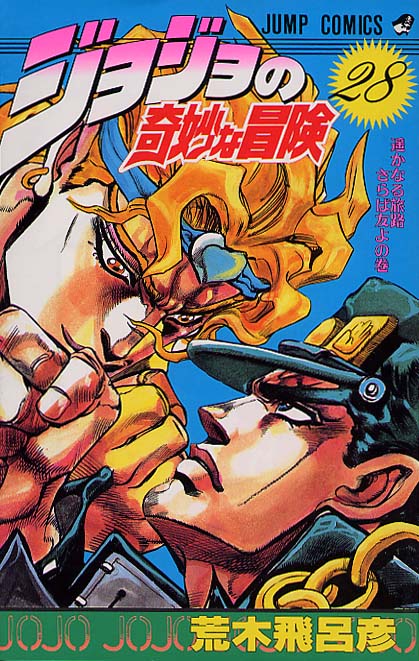 This is the story of the Joestar family and their ongoing conflicts with the supernatural. The series currently spans well over 100 years (and well over over 100 volumes).

It all begins in the 1800s when a boy named Jonathan Joestar met an orphan named Dio Brando. Jonathan's wealthy father takes the boy in and raises him as his own. However, Dio is secretly scheming to take Jonathan's place as the favored son and heir to the Joestar family. First, Dio torments Jonathan throughout their childhood, and later, he enacts a plan to poison Jonathan's father. Things become more complicated when Jonathan learns of these plans, and Dio simultaneously learns how to become a vampire. From there on out, Jonathan must find a way to destroy this supernatural foe and save the day.

And that's just the first of eight parts to the wonder that is JoJo's Bizarre Adventure.

From there, the series becomes a multi-generational epic, following the adventures of Jonathan's descendants from the 19th century to the present day. Each of the eight (so far) parts of the saga covers the adventures of another generation of the Joestar bloodline, which spreads all over the world, and each features a lead character whose name can somehow be read as JoJo.

Created in 1987 by the mangaka Hirohiko Araki, the series is famous for its original and unique art style, intricate plot and creative battles. It also features a huge number of allusions to Western rock music, including characters named Dio, Speedwagon and Zeppeli, just to name a few. Although JoJo's Bizarre Adventure has not been able to receive recognition like other imported manga and anime, it is still very well received by fans all over. And with such insane plots as exploding people, 15-year-old gangsters, and epic Rock, Paper, Scissors matches, is it any wonder?

Western audiences are likely more familiar with the memes the series has produced because of the series' general theme (read: badassery), as well as the Fighting Game from Capcom released in 1999 and the 10-episode OVA. Speaking of the fighting game, a leaked Xbox Live Arcade release list has revealed the existence of an HD port of it, which came as a big surprise to many as Capcom had lost the license after their endeavors with the series shifted to adventure games which did not sell well in Japan. [not current]

Any attempts to destroy Superfly from the inside will automatically reflect the exact amount of damage back in the direction of the source.

Retrieved from "https://allthetropes.org/w/index.php?title=JoJo%27s_Bizarre_Adventure&oldid=1816180"
Categories:
Cookies help us deliver our services. By using our services, you agree to our use of cookies.