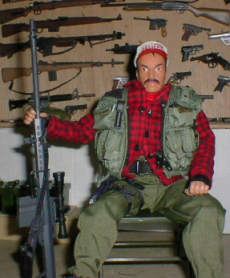 This ain't some kind of game.

"The guys at work used to laugh when I hit the rifle range at lunch. Ain't so funny now, is it?"
—Louis, Left 4 Dead

They're coming, but they're not gonna get me, not without a fight! Who's "they"? Doesn't matter! It could be an Alien Invasion, a Zombie Apocalypse, feral hordes of barbarians, or even butterflies! (those are some nasty bastards) But whatever they are, I'm prepared! I have me this bowie knife, tinfoil hat, good old two-barreled Betsy (plus her extended family), and a year's supply of food and water...

What? "Share"? "Help others survivors"? It's a dog-eat-smaller-yappy-dog world out there, "friend", and if ya ain't strong enough to defend yourself... Oh, I see what you're about, you want to stick a crazy straw in my neck and steal my stuff, don't you?! That's right, back away from the crazy person... Crazy Prepared like a FOX!

You want me to help you fight them? You can't fight them anymore than an ant fights an elephant, everyone who tries ends up Dying Like Animals! Ain't seen bloodshed like that since the war...

"Calm down"? I am calm! I am the very picture of calm! And Rational, too! Wait a minute... you're one of THEM!

Don't you go anywhere, I'll go get the rest of my Untrusting Community to lynch you! No, better yet, my militia buddies! No matter how many orphans you save! I'll do what it takes to survive!

Examples of Crazy Survivalist include:

Manny: When did you lose your mind?
Buck: Ah, about three months ago, actually. I just woke up one morning married to a pineapple! An ugly pineapple. Ahh, but I loved her...

Green Arrow: Does everything in your world have a sinister motive?
Question: Yours too. You just don't know it yet.

"I am a duck bent on self-preservation."