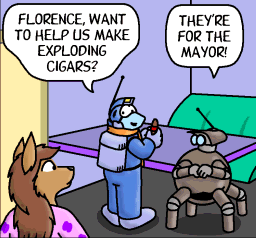 From left to right: Florence, Sam, and Helix, crew of the Savage Chicken.

Freefall is a long-running webcomic (over 3600 strips as of August 2021) by Mark Stanley. It's also a straight-up Long Runner, having passed the decade mark in 2008.[1] Starting with the April 19, 2006 strip it's been colored mostly by colorist George Peterson. Set on a planet in the early stages of terraforming, the strip deals with the antics of alien spaceship "captain" Sam Starfall, his robot friend Helix, and their Bowman's Wolf engineer Florence Ambrose.

One of the last words one would use to describe Sam is "trustworthy". He's not always the brightest and is a petty crook (at least by human standards). It's a wonder he hasn't gotten himself killed yet, although the local police may have something to do with this. He can be summed up as "a larcenous squid in an environment suit."

Helix has the mind of a child, and were he human, a weak stomach. He's described by Florence in one strip as being "one of those robots who faints at the sight of battery acid."

Florence, an anthropomorphic genetically-engineered red wolf, is easily the most intelligent member of the entire cast (not just the main characters) and the Trope Namer for My Instincts Are Showing.

For a humorous comic, Freefall actually packs a lot of real-world science into its science-fiction setting. Most of it is pretty accurate, especially regarding space travel and physics—the author often likes to show his work.

Freefall has a WikiFur article, after The Other Wiki removed its entry due to lack of notability under Wikipedia guidelines.

Freefall is the Trope Namer for:
Tropes used in Freefall include:

(Fortunately for Winston, he's actually a character in a science fiction story.)

Retrieved from "https://allthetropes.org/w/index.php?title=Freefall&oldid=1917306"
Categories:
Cookies help us deliver our services. By using our services, you agree to our use of cookies.