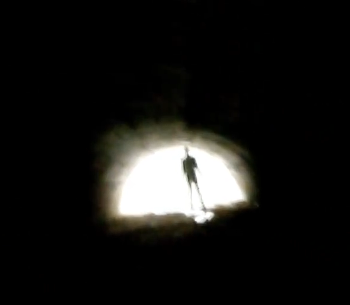 Marble Hornets is an Alternate Reality Movie following discoveries made while looking through raw footage of a trite student film. The series is currently[when?] in its third loosely-defined season. Marble Hornets was instrumental in codifying parts of The Slender Man Mythos, but is not part of the Intercontinuity Crossover that includes many of the blogs and vlogs that followed it, although MH does feature in other canons as either a chronicle of real events or a fictional series... it leads to some confusion. The movie appears to have started in this post from the original Slender Man thread on the Something Awful forums.

In 2006, film student Alex Kralie suddenly abandons his movie in the midst of production, swearing to burn the tapes and never speak of it again. Alex's friend Jay rescues the taped material and, years later, begins reviewing them, only to realize too late that the abandoned film shoot was a Nightmare Fuel refinery and that by digging it up again he may have reawakened sinister forces.

Jay's YouTube account chronicles material from the tapes and, increasingly, the bizarre and frightening events of his own life. A Twitter page was added some time later. Since Entry #9, he's noted a guy named 'totheark' responding to each entry, adding a whole new level to the scary.

Has a fan run wiki with commentary, a timeline, and transcripts of all the entries. Both the first and second seasons are also available on DVD.

Tropes used in Marble Hornets include:

Retrieved from "https://allthetropes.org/w/index.php?title=Marble_Hornets&oldid=1915627"
Categories:
Cookies help us deliver our services. By using our services, you agree to our use of cookies.