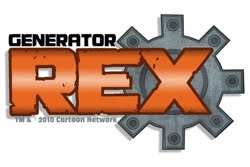 An animated series from the creators of Ben 10, premiered on Cartoon Network on April 23, 2010. The plot and characters are based on a two issue comic book, called M. Rex. When Man of Action Studios decided to turn this into an animated series, the title had to be changed to Generator Rex when they found out that M. Rex was already trademarked.

The plot focuses on a 15 year old boy named Rex, who gains the ability to produce bio-organic machines from his body due to an accident called The Event that spreads nanomachines called Nanites all over the world and causes random mutations in people, animals and plants. The central story is based around the organization called Providence that is tasked with the job of protecting civilization from the mutants called E.V.Os. Rex is used by Providence because of his ability to control his Nanites to produce machines from his body to fight the E.V.Os and cure them of their mutations so they can go back to being regular functioning members of society.

Due to Rex's mysterious past involving the initial outbreak of the Nanites he has amnesia and works with providence while trying to uncover what really happened to cause the event and his abilities. Rex is hunted by an evil scientist named Van Kleiss who has connections to The Event and is trying to capture and use Rex for his own means. Rex is assisted by his talking chimp, lazy, wisecracking E.V.O sidekick and a mysterious Providence agent named Agent Six.

As all of Man Of Action's shows Generator Rex normally does not take itself seriously even when dealing with very serious subjects, such as the theme of people not being very fond of Providence, their methods and lack of transparency sometimes taking it to extremes such as creating their own E.V.O hunting groups and outright attacking Rex due to him being an E.V.O and his "messy" way of dealing with E.V.Os. Rex often does not listen to his superiors - especially not to the head of Providence, White Knight. Instead, Rex decides to run away and try to spend as much of his life as he can as a normal teenager but seemingly normal situations often lead to altercations with E.V.Os.

Has a Character Sheet right this way. And a recap page.

After three seasons the storyline concludes with the 2-part special "End-Game". An unrelated one-shot, "Rock My World", was released out of order afterwards.

Tropes used in Generator Rex include:

Retrieved from "https://allthetropes.org/w/index.php?title=Generator_Rex&oldid=1481779"
Categories:
Cookies help us deliver our services. By using our services, you agree to our use of cookies.