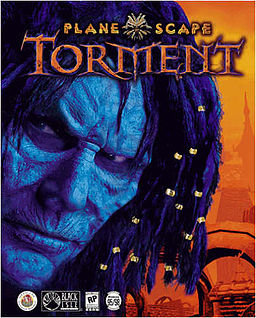 Released in 1999 by Black Isle Studios and set in the Dungeons & Dragons setting Planescape in the Outer Planes, the Role-Playing Game Planescape: Torment was applauded for its storyline and script. What starts off looking like a stereotypical amnesia tale drops you and your hero into a very strange world with interlocking plotlines about your past, complete with a series of helpers who may or may not know more than they're letting on. It's like Memento in computer game form.

It's also well-known for being heavy on the personal interactions and puzzles, while relatively light on the combat... so much so that it's more a highly interactive novel than a game. In many situations, your allies are more useful for the advice they can bring and the clues they can decipher than any capacity as "another warm body to throw at the enemy" (although some of them are pretty hot indeed). For a complete gaming experience, creating a character with high intelligence gives the best dialogue options.

The game makes an effort to subvert or avoid as many RPG tropes and cliches as possible. Instead of Saving the World, the player character is interested only in discovering the truth about himself. Instead of a Cool Sword, you have "equippable" tattoos, earrings and even eyes. Your statistics matter a great deal, and the game plays dramatically differently depending on what you decide to emphasize.

The main character's Healing Factor allows you, among other things, to wield your own arm as a club and wear your own intestines as an armlet. You can bite your fingers off and pluck your eyeballs out in order to replace them with something better. Death is usually just a minor annoyance that can be often turned to your advantage.

Bottom line: this game is strange. And very highly acclaimed.

An Enhanced version of the game was released in Fall of 2019 (in a set that also includes Icewind Dale) for the PS4, XB1, and Switch.

Tropes used in Planescape: Torment include:
Retrieved from "https://allthetropes.org/w/index.php?title=Planescape:_Torment&oldid=1797378"
Categories:
Cookies help us deliver our services. By using our services, you agree to our use of cookies.