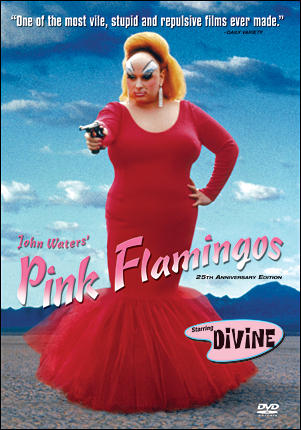 The film that launched John Waters as the world's leading authority on bad taste, Pink Flamingos is a 1972 transgressive comedy film starring Divine, David Lochary, Mink Stole, Edith Massey, Danny Mills, and Mary Vivian Pearce. It follows the adventures of Divine (living under the alias of Babs Johnson), a fat, style-obsessed criminal who lives in a trailer with her mentally ill mother Edie, her delinquent son Crackers, and her traveling companion Cotton. Divine, however, is furious when a pair of perverts, Raymond and Connie Marble, try to steal her title of "filthiest person alive." Hilarity Ensues.

Tropes used in Pink Flamingos include:

Mr. Vader: Do you believe in God?
Divine: I AM GOD!

Reporter: Divine, are you a lesbian?
Babs: Yes, I have done everything!
Reporter: Does blood turn you on?
Babs: It does more than turn me on, Mr. Vader, it makes me come! And more than the sight of it, I love the taste of it, the taste of hot freshly killed blood!
Reporter: Could you give us some of your political beliefs?
Babs: Kill everyone now! Condone first degree murder! Advocate cannibalism! Eat shit! Filth are my politics, filth is my life!