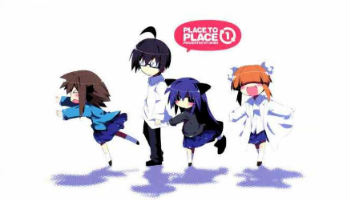 The girl in the midde is a Tsundere. The guy is Oblivious to Love. The other two are there to tease them. Hilarity Ensues.

A Slice of Life Yonkoma manga that was adapted into an anime in April 2012.

Tropes used in Place to Place include: