This is a franchise page for the Magical Girl Lyrical Nanoha franchise. Please don't link here, unless you're referring to it in general. If the link that brought you here mentioned any particular series - including Nanoha Original - and not the franchise as a whole, please redirect it to one of the series pages listed below. 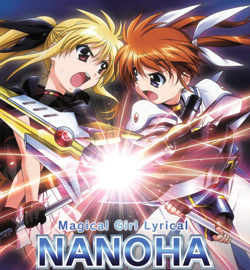 Female bonding at its awesomest.

It has been noted by TV executives that Magical Girl series usually have Multiple Demographic Appeal -- not only are they popular among 4 to 9-year-old girls, but also among 19 to 30-year-old males. Shows such as Pretty Cure attempt to please both demographics. Nanoha is made exclusively for the second.

The series has a rather unusual production history. Nanoha first started as a Token Loli in a certain H-game named Triangle Heart 3 ～sweet songs forever～, part of a trilogy of such H-games. She was a very minor character, but proved popular enough to eventually get a mini Spin-Off game where she becomes a typical sickeningly sweet Magical Girl. A few years later they decided to make an anime based on that, and so Magical Girl Lyrical Nanoha was born. Said series proceeded to throw in a bunch of tropes that would be more associated with Humongous Mecha shows for good measure, simply because a production crew member noted that Nanoha's costume design made her look like a Gundam. From there on she went on to become one of the most Badass Magical Girls yet to have existed.

What makes Magical Girl Lyrical Nanoha unique is the detail put into the fight scenes, much to the delight of the Seinen market's nostalgia for grand space battles and fist-pumping action. Many people who can't stand typical Magical Girl shows enjoy Nanoha because of this. It is also unusual among Magical Girl series in that Nanoha loves her job, enjoys her powers, and makes responsible decisions regarding them extending into adulthood.

Over the years Lyrical Nanoha has branched off into a multi-media franchise with several separate continuities:

The entire series is animated by Seven Arcs and written by Masaki Tsuzuki, who has a habit of radically shifting its tone and feel between almost every installment.

The following tropes are common to many or all entries in the Lyrical Nanoha franchise.
For tropes specific to individual installments, visit their respective work pages.
Retrieved from "https://allthetropes.org/w/index.php?title=Lyrical_Nanoha&oldid=1940079"
Categories:
Cookies help us deliver our services. By using our services, you agree to our use of cookies.