Affectionate Gesture to the Head 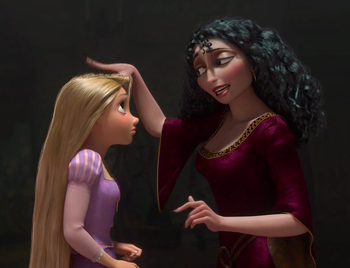 Adults will pat the head of a child to show them they've done well, tousle the child's hair affectionately to take the sting out of a teasing comment, or do one of the former in a playfully patronizing way.

Also can be done from one adult to another if one feels protective and affectionate of the other, or just wants to annoy them.

The gesture is done to and from people of both sexes, and can be gentle or rough, though the rough version is most common among boys and their dads/older brothers (or substitute father-figures). Expect the dad to be playfully rough, and the boy to shut one eye while letting his head move with the gesture and maybe complain.

The gesture can also be performed genuinely or insincerely. Expect the gesture to be done awkwardly by a closet Child-Hater.

This is mainly true of North America. In Asian countries, this may be considered rude, due to spiritual connotations.

Examples of Affectionate Gesture to the Head include:

Retrieved from "https://allthetropes.org/w/index.php?title=Affectionate_Gesture_to_the_Head&oldid=1855963"
Categories:
Cookies help us deliver our services. By using our services, you agree to our use of cookies.